Blockbuster Tamil director N. Lingusamy, known for his films like Aanandham, Run, Sandakozhi, Paiyaa, Vettai to name a few, is now teaming up with leading Telugu actor Ram Pothineni for the tentatively titled RaPo 19,  being planned to be made as a Telugu-Tamil bilingual. The team-up was announced officially recently, with fans looking forward to witnessing the hit director weave his magic in Telugu cinema next. In that light, it has now been officially announced that current youth sensation Krithi Shetty has been paired opposite Ram Pothineni in RaPo 19 being produced under Srinivasaa Chitturi's Srinivasaa Silver Screen banner.

A special announcement poster for RaPo 19 featuring the news of Krithi Shetty coming on board Srinivasaa Silver Screen's sixth production venture has been unveiled. Krithi has gone on to become a heart-throb among the masses in Andhra Pradesh & Telangana after her debut in the recently-released Uppena, which had her paired opposite Vaishnav Tej, with 'Makkal Selvan' Vijay Sethupathi playing the antagonist. RaPo 19 will incidentally be Lingusamy's debut in Telugu cinema and also his next big film after his Sandakozhi 2 in 2018, with fans looking forward to the director hitting the bullseye once again. Check out below the announcement poster of Krithi Shetty coming on board Ram Pothineni-Lingusamy's RaPo 19: 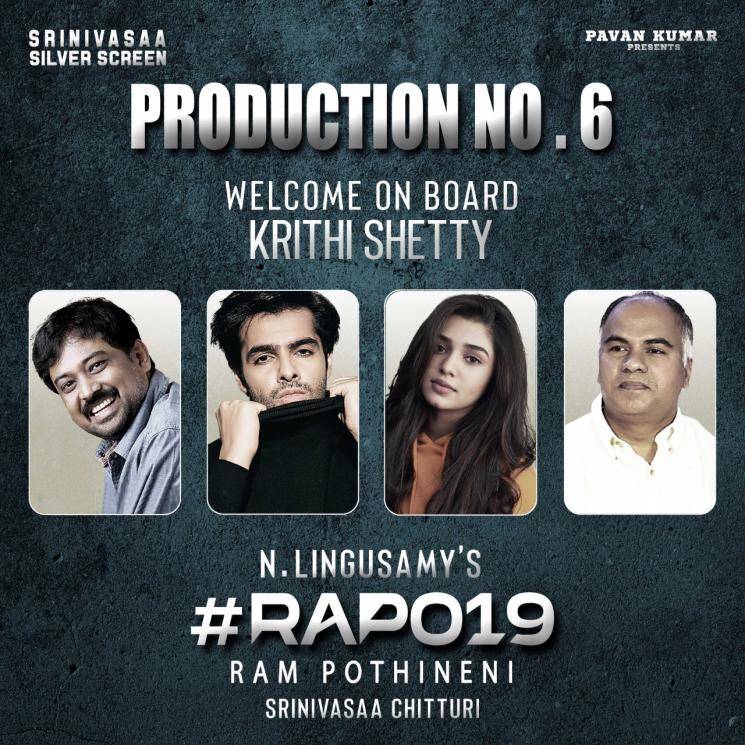 There has been massive buzz surrounding RaPo 19 as the film is being billed to be high on action, which has become a big staple of Ram Pothineni's films of late like iSmart Shankar and RED. Although his RED, which is a remake of Arun Vijay's Thadam, didn't fare well at the box office, fans praised the stunts in the film, with many likening Ram Pothineni's action status after his iSmart Shankar. Likewise, Lingusamy fans too are looking forward to the director getting back to his winning ways once again after his Anjaan with Suriya and Sandakozhi 2 with Vishal had a lot of action and drew huge praise.