Very recently, KPY and Cook with Comali sensation Pugazh bought a luxurious car and the news created a huge buzz on social media. The people of Tamil Nadu were so happy seeing the growth of Pugazh. Seeing the humongous love and support from the audience, Pugazh felt emotional and he thanked everyone for being an instrumental part in his success. A highly elated Pugazh had said that he was the first person in his family to have bought a car and he shed a few drops of happy tears when he said that his mother was happy about his growth. Pugazh's immense growth and popularity in recent years is definitely a success story that everyone should know.

The young comedian has a good rapport with all of his co-actors and friends from the television industry. One such friend for Pugazh is Bala, who has been travelling with him since the Kalakka Povadhu Yaaru days. Bala is also a part of the ongoing superhit edition of Cook with Comali and he has a separate fan base. Having said that, one of the fans tagged Pugazh and expressed that he is sad about Bala not buying a car, yet. However, Pugazh had a mature reply to the fan and it has gone viral among the audience.

Answering the fan, Pugazh wrote, "Ithu Balavoda car um than nanba don't feel nanga vera vera illa". The reply is loosely translated in English as, "The car belongs to Bala, as well. You don't feel bad. I and Bala are not different". This reply from Pugazh indeed shows the beautiful friendship between Pugazh and Bala and we wish both of them to travel a long way together. On the acting front, Pugazh will be seen playing the comedian in Santhanam's upcoming film, Sabhaapathy, which is scheduled to release in theatres during the summer holidays. Pugazh has also been signed to act in Arun Vijay's upcoming rural action drama, directed by Hari. Priya Bhavani Shankar plays the female lead in this untitled film that has music scored by GV Prakash.

Apart from Sabhaapathy and AV 33, Pugazh is also a part of several other interesting biggies and we can expect announcements about it in the coming weeks. Talking about Bala, he was recently seen in Vikram Prabhu's Pulikkuthi Pandi and up next, he would be seen in the Harbhajan Singh - Losliya starrer Friendship. For now, check out Pugazh's reply to the fans' post here: 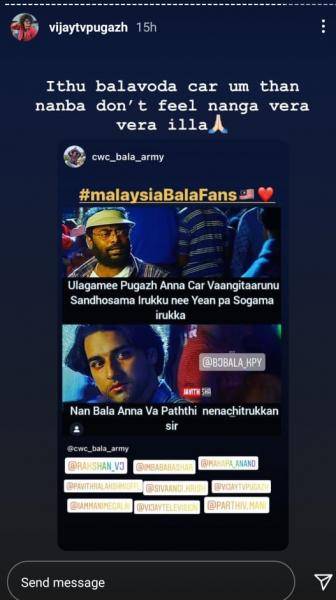 Bigg Boss sensation Aari's massive announcement on his next film!