National Award-winning actor Dhanush, who has also established himself as a successful producer and director, celebrated his birthday earlier this week on July 28 with the first look poster of his upcoming film, Pattas, being unveiled by Sathya Jyothi Film as a treat for fans. The reputed production house, who tasted massive blockbuster success in the beginning of this year, Viswasam, starring ‘Thala’ Ajith, are making two films with Dhanush - Pattas under director RS Durai Senthilkumar of Kodi fame and an untitled venture with Ratsasan director Ramkumar, which is yet to kick off filming. Now, producer T.G. Thyagarajan of Sathya Jyothi Films has issued a statement where he goes on to talk about how the Pattas first look and states, “When we decided to release the first look and title of our Pattas on this great celebratory occasion, we felt that Dhanush fans need a sumptuous treat. When I say ‘Dhanush fans’, it isn’t simply the ones involving hardcore buffs, who unconditionally jubilate over his films for his fan base stretches out to the International platforms too,”. 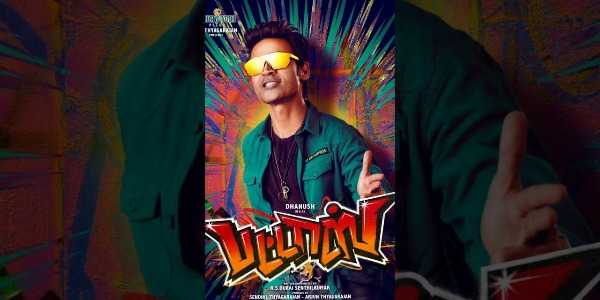 Sathya Jyothi Films’ T.G. Thyagarajan added, “Dhanush has established a self-made platform with his unique experiments on global panorama and we had to make sure that the first look has mass and class amalgamated together. Now to see the funky look of Dhanush and the flamboyant flashes of colours being greatly appreciated in accordance to the title ‘Pattas’, we are whelmed with huge confidence that the movie will turn to be a sure-footed treat for not just Dhanush fans, but universal audiences too,”.

T. G. Thyagarajan continued saying, “Undoubtedly, it’s all due to the presence of Dhanush, who isn’t just an excellent actor, but a fitness freak, whose youthful looks have always put the crowds in awe over the first look. Furthermore, director Durai Senthilkumar has been exerting his best approach in showcasing the star in a lovable style. So these elements put together have made Pattas first look more appealing. We at Sathya Jyothi Films have been ritually inclined to the concept of creating family entertainers and I’m sure, Pattas will be yet another justification to this,”.

With the film’s second leg shoot happening on full swing, several announcements are set to be made soon in shorter intervals. Written and helmed by R.S. Durai Senthilkumar, Dhanush, Mehreen Pirzada, Naveen Chandra and Sneha form the main cast of Pattas with the Vivek-Mervin duo composing music, cinematography being handled by Om Prakash, Dhilip Subbarayan for action and Vivek penning the lyrics.