Bigg Boss Tamil season 4 came to a grand conclusion on Sunday, with Aari Arujunan being declared as the winner, followed by Balaji Murugadoss being announced as the first runner up, Rio Raj as the second runner up, Ramya Pandian as the third runner up and Som Shekar as the fourth runner up. The recent edition of the hit reality TV show hosted once again by 'Ulaganayagan' Kamal Haasan kicked off in October last year and went on to be telecast for more than three months, with Vijay TV and Hotstar getting phenomenal ratings.

A major highlight of the recently-concluded finale was the finalists from Bigg Boss Tamil season 3 entering the Bigg Boss 4 house to bring out the contestants one by one. Bigg Boss 3 winner Mugen Rao had brought out Som Shekar, with Sherin Shringar entering the Bigg Boss 4 house to bring out Ramya Pandian, followed by Kavin escorting Rio Raj, thereby leaving the two finalists Aari and Balaji Murugadoss. In that light, a controversy has now blown up on social media after Sherin had gone to bring out Rio when she said a statement about Balaji, which seemed to be sarcastic in nature. The statement, although fun in tone, sounded a bit harsh, with Bala himself telling then and there itself that, "it was rude".

Despite being casual in tone, Sherin's statement has since become an issue with Balaji's fans, who have been posting abusive comments on her social media pages. With the issue gaining steam, Balaji posted a story on his Instagram page requesting fans not to abuse Sherin on social media, while adding that they both are good friends. Bala further also appealed to his fans to not post any abusive statements against any of the Bigg Boss 4 contestants. He wrote, "Dear Fans, Came to know few people are posting abusive comments on Actress @sherinshringar instagram and Facebook. She is a very good friend of mine. PIz don't post abusive comments on anyone's social media. Thank You". Check out his Instagram story below: 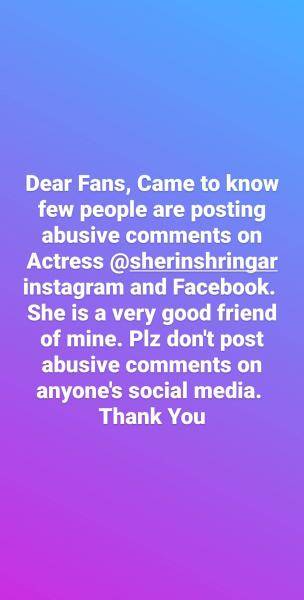 Balaji Murugadoss has turned out to be one of the biggest highlights of Bigg Boss Tamil season 4, with many complimenting him for his outspoken nature, while some others have criticized him for his attitude on a number of occasions. His rapport with his fellow contestants came into debate several times during his 105-day stay in the Bigg Boss 4 house, with fans also showering him with praises for putting up a tough fight till the end.