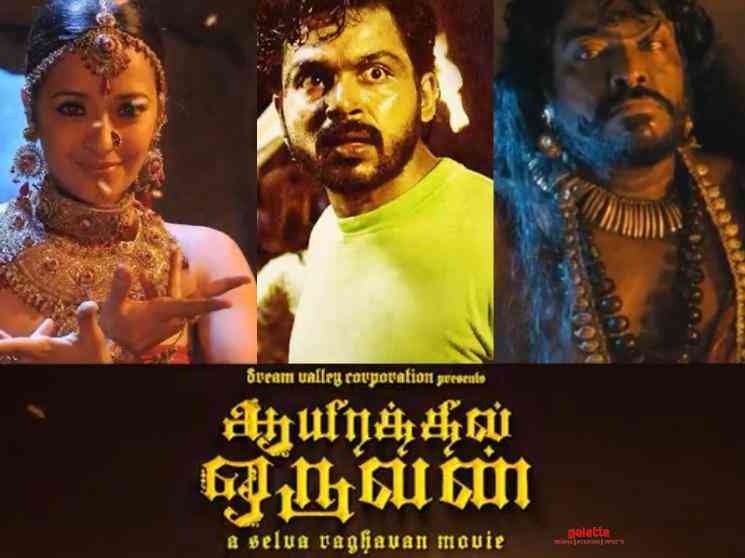 Director Selvaraghavan's Aayirathil Oruvan will have a grand re-release in theatres across Tamil Nadu from December 31. Though the film was not well received during the time of its release in 2010, it attained a cult status among the audience after a few years. The fans celebrated the film after the boon of social media. Aayirathil Oruvan has a high in the screenplay in frequent intervals and the fans loved it. However, it was too late when the realisation was made. The film had a special screening last year for Selvaraghavan's birthday and the shows went housefull in the theatres. Following that, the film will now have a grand re-release on December 31 in the theatres.

Those who want to celebrate the film and show their love for the team of Aayirathil Oruvan can watch the film from this weekend. Actor Karthi posted a new video on his Twitter page, recollecting his experience about acting in Aayirathil Oruvan. Talking in a video, Karthi says, "When I was dubbing for Paruthi Veeran, I got a call from Selvaraghavan and that is when Aayirathil Oruvan happened. It was my second film. I was totally excited when I got to know that it was an adventure film. When I had no idea about what I am going to do after Paruthi Veeran, Selva called me and told me about this film that looked ambitious and grand. The entire cast and crew spent 2.5 years of time on this single project with dedication, passion, and love for cinema.

None of us were involved in any other projects during the making of Aayirathil Oruvan and we gave our best. Selva is definitely an important and special director in Tamil cinema. The film's music (credits: GV Prakash Kumar) is still fresh, even ten years after its release and it is being celebrated even today. My heartiest thanks to producer Ravindran sir for bringing back this film again on screen after 10 long years. Even in 2010, it was a bold experiment and I wholeheartedly thank Ravindran sir for believing in our story and content. Get ready to see Aayirathil Oruvan once again on the big screens from December 31."

The fans are now eagerly waiting for the sequel of Aayirathil Oruvan to happen, but there has been no official development regarding the same. Selvaraghavan has always been ambitious and excited about Aayirathil Oruvan 2, but the project may materialise only when the right producer comes into the picture. For now, get set to watch Aayirathil Oruvan in the theatres from December 31.