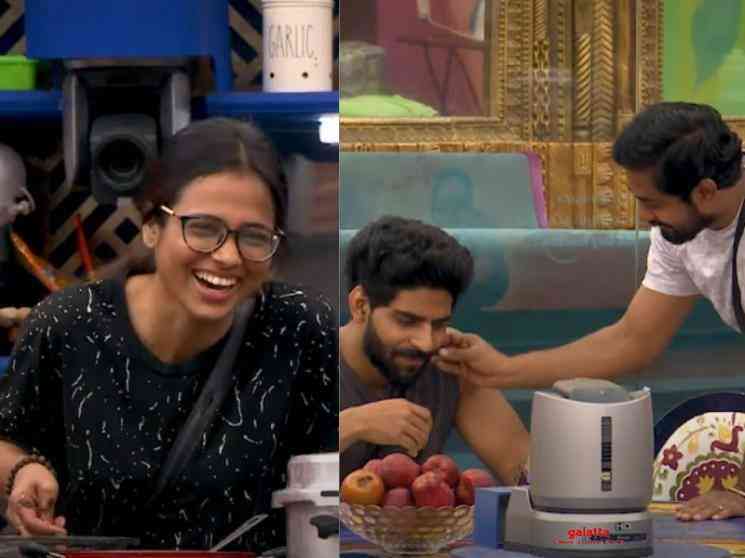 Bigg Boss Tamil season 4 being telecast on Vijay TV and also streaming on the Hotstar OTT platform has been receiving stellar feedback from fans ever since the show kicked off in October. The hit reality Tamil TV show being hosted by 'Ulaganayagan' Kamal Haasan has so far witnessed 10 evictions among whom include Velmurugan, Rekha Harris, Sanam Shetty, Jithan Ramesh, Suresh Chakravarthy, Samyuktha Karthik, Aranthangi Nisha, Anitha Sampath and the wildcard entrants Suchithra and Archana. All sights are now set on who will sent out of the Bigg Boss 4 house next as the battle has turned fierce over the past few days between the remaining contestants that include Ramya Pandian, Som Shekhar, Rio Raj, Shivani Narayanan, Aari, Balaji Murugadoss, Gabriella Charlton and Aajeedh.

Now, Vijay TV has released the third promo for Wednesday, which focuses on Ramya Pandian, Balaji Murugadoss and Aari. In this latest promo, we see Bigg Boss first telling Bala to go into freeze mode after which he stops eating, with Aari poking fun at him by turning affectionate and Ramya fighting within herself to not crack up. Next, Bigg Boss drops the announcement telling Aari to walk back in reverse after which he once again makes fun of Bala. We see Ramya this time next asking Aari whether he is a little too fond of Balaji, prompting him to laugh. Ramya then informs them that she is not liking this new bonding between the two and asks them to instead fight.

The fourth edition of Bigg Boss has so far seen a number of conflicts and both Aari and Balaji have come close to serious burst outs on previous occasions. This latest promo, although a fun one, just shows how much the contestants have understood each other, and it now remains to be seen whether the two will ever get involved in any other arguments in the days ahead. Bigg Boss Tamil season 4 is nearing its conclusion as only less three weeks now remain for a winner to be crowned. Watch the Bigg Boss Tamil Season 4 | 30th December 2020 - Promo 3 below: