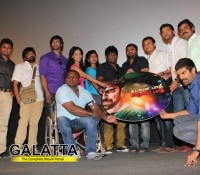 Kadavul Paathi Mirugam Paathi is a psycho road thriller film directed by Raj and Suresh Kumar. Music is by Rahul Raj who is a famous music director in the Telugu and Malayalam industries. He is making his debut in Kollywood with this film. Cinematography is by Kishore Mani and editing is by V.T Vijayan. Choreography for the film has been done by Gayathri Raghuram. Viveka, Yugabharathi and Karunakaran have penned the lyrics. This film is produced by Celebs and Red Carpet Films in association with Full House Entertainment. KPMP stars Pooja of Naan Kadavul fame, former Miss India Swetha, senior model Abhishek and Raj in pivotal roles. The music album is released by Triple V Records.

Shot on the Chennai to Hyderabad route, it is a road and travel film. Myna Sethu is also doing an important in the film. Talking at the audio launch, Pooja stated, "I am here today to support Raj. I have known him right from when I was 16 years old. We met during a college culturals and he had a huge crush on me back then. When I was in Srilanka he called me and told me that he is producing a film and asked if I would be willing to do a cameo. He is a wonderful human being and a very close friend and I had to say yes. I wish him all the very best. I am very proud of him."