Popular model and budding actress Pavithra Lakshmi recently rose to fame among the Tamil audience after participating in the second season of Cook with Comali. Pavithra has managed to create a good impact with her presence in the show and she has got a huge fan base on social media. Pavithra adds fresh colour to the reality show and her pairing with Pugazh is one of the most loved combinations. Pavithra and Pugazh have shared a good rapport and whenever they pair together, their combination strikes big and wins the hearts of the audience. In last week's episode of Cook with Comali, Pavithra was not seen and she couldn't take part due to a few undisclosed reasons.

It was a celebration week and the audience witnessed the four finalists of the first season, participating in the show. It was quite fun to see four contestants from the first season and four contestants from the second season coming together for a celebration round and the show garnered huge attention. Ramya Pandian, who earned wide popularity and fame through the first season of Cook with Comali, returned to the show and she was paired with Pugazh. Ramya and Pugazh's pairing also has a separate fan base and we know about it. However, it looks like a certain section of the audience were quite disappointed with Ramya - Pugazh's pairing as well.

One of the fans claimed that Pugazh's pairing with Pavithra looks much better than his pairing with Ramya Pandian and expressed disappointment over the same. However, Pavithra came in defence for Ramya and supported her. Pavithra Lakshmi took to her official Instagram page to post a story, supporting Ramya and asking the fans to calm down.

Talking about it, Pavithra Lakshmi posted, "It's very easy to compare two people. It's very easy to find mistakes. But we have to remember end of the day, its a television reality show. And the major motto is to entertain you all. Please don't take things personally. None of us over there do it. Ramya was a sweetheart all along the whole of last season which I very recently only started watching. Don't judge someone with just a one hour show. Give all of us entertainers the same love and support you all always gave. We are nothing without you. You can build or break anyone. But please spread as much love as possible.".

This kind gesture from Pavithra is good to see and it has been garnering attention of the fans. Check out Pavithra Lakshmi's statement about Cook with Comali here: 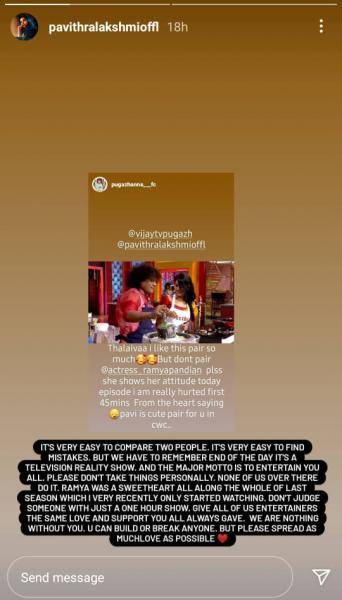