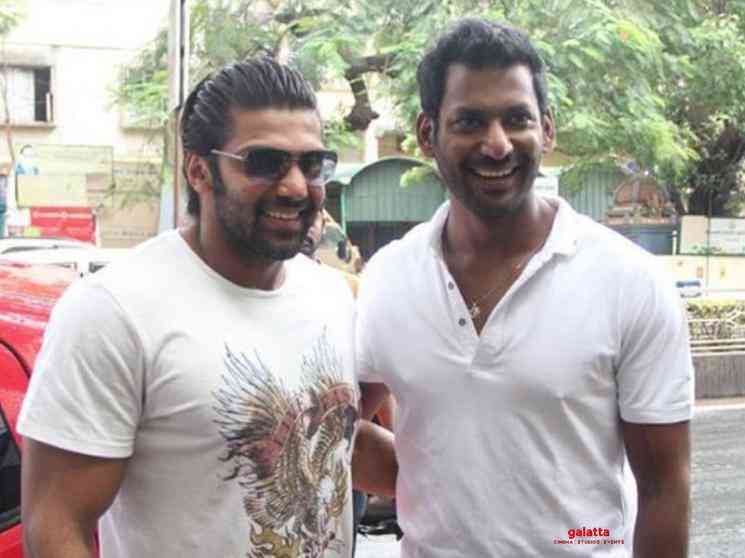 A film that raised instant excitement and curiosity among fans is the upcoming Vishal and Arya starrer titled Enemy. Being directed by Anand Shankar of Arimba Nambi, Iru Mugan and NOTA fame, the film billed to be an action thriller will see Vishal as the hero, with Arya playing the antagonist. With production on Enemy resuming now after an important schedule last month at the Ramoji Film City in Hyderabad, it has now been revealed that Arya had sustained a serious injury on Monday while shooting for an action sequence at the EVP Film City on the outskirts of Chennai.

Both Arya and Vishal had shot for the action scene today without a body double, with the former getting admitted to the hospital after being injured. Arya was administered necessary medication and treatment and joined the sets of Enemy once again to complete the shoot despite his injury. Known to be a physical actor, Arya has shown his commitment to the fullest in earlier roles, which was recently evident in his physical transformation for director Pa. Ranjith's Sarpatta Parambarai. Enemy is Vishal's 30th and Arya's 32nd film, with a title look poster unveiled sometime back fetching a tremendous response from fans.

Up until now, no official poster for Arya's look in Enemy has been unveiled, with the first look for Vishal released a few days back. Apart from Vishal and Arya in the film, the cast also includes names like Dubsmash and Tik Tok fame Mirnalini Ravi, who made an impressive debut on the big screen in acclaimed director Thiagarajan Kumararaja's Super Deluxe last year. She has been paired opposite Vishal, with five-time National Award-winning veteran actor Prakash Raj also on board Enemy in a pivotal role, which incidentally is his next big film after his Asuran and the recently-released Paava Kadhaigal.

Enemy is also Mini Studios' ninth venture and its fourth Tamil venture in a row. Composer S. Thaman, who has been on a roll with landing several biggies including Silambarasan TR's Eeswaran, is also scoring the music for Enemy. The film has a strong technical crew featuring names like RD Rajasekar for the cinematography, Raymond Derrick Crasta for the editing, T Ramalingam for the art direction and Ravi Verma as the action director. Shan Karuppusamy and S Ramakrishnan are writing the film's dialogues, while the lyrics are penned by young sensation Arivu.