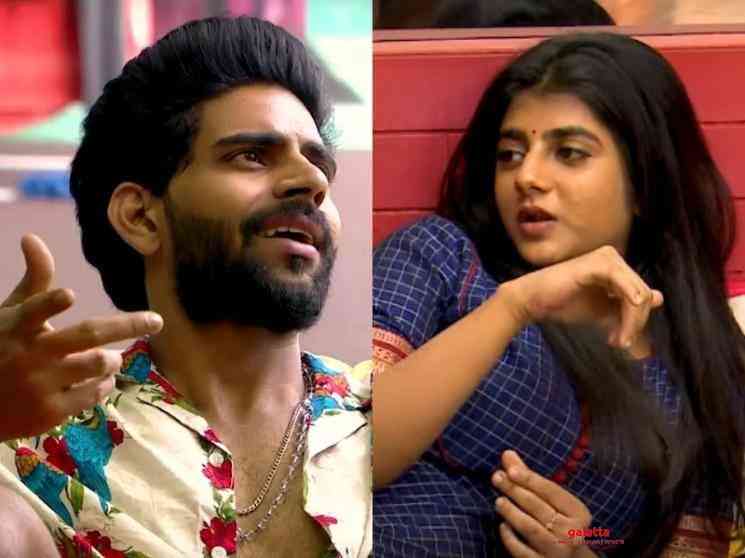 Vijay TV and Hotstar are riding the wave once again with yet another highly successful season of the hit reality show, Bigg Boss Tamil. 'Ulaganayagan' Kamal Haasan is hosting the show, which has so far witnessed ten evictions among whom are Velmurugan, Rekha Harris, Sanam Shetty, Jithan Ramesh, Suresh Chakravarthy, Samyuktha Karthik, Aranthangi Nisha and the wildcard entrants Suchithra and Archana, with the most recent contestant being Anitha Sampath. As Bigg Boss 4 has now entered its 85th day, the race among the remaining contestants is picking up steam, with the battle between Som Shekhar, Aari, Rio Raj, Shivani Narayanan, Balaji Murugadoss, Gabriella Charlton, Aajeedh and Ramya Pandian quite visible.

In the third promo for Monday, we see Gabriella speaking to a Bigg Boss Tamil season 4 contestant outside the shower and telling that she has always been outspoken in her views and that Balaji Murugadoss is now cornering her. She goes on to say that he has pushed her to this position only because she expressed her views in the open to host Kamal Haasan. Balaji is next seen telling Aajeedh and Shivani that he had earlier told Gabriella that he had doubts over the treatment meted out to VJ Archana prior to her eviction as to whether it was real or fake. He informs them that he had spoken to Gabriella about in total confidentiality and that he had told her believing her to be his friend, which she went behind his back and telling the others. Balaji then asks Aajeedh as to who is the one speaking behind people's backs - he or Gabriella? Towards the end, we see Gabriella contemplating the outcome of the events and saying that there is always a problem irrespective of being outspoken or quiet.

This latest Bigg Boss 4 promo focuses completely on Balaji and Gabriella and their relationship, which is starting to show signs of trouble. Although the two have not been involved in any big conflicts or confrontations to date, there have been occasions in the past during the course of Bigg Boss Tamil season 4 where the two have shared heated words. It remains to be seen whether this distress between Balaji and Gabriella transcends to something bigger and will be addressed in tonight's episode. Watch the Bigg Boss Tamil Season 4 | 28th December 2020 - Promo 3 below: