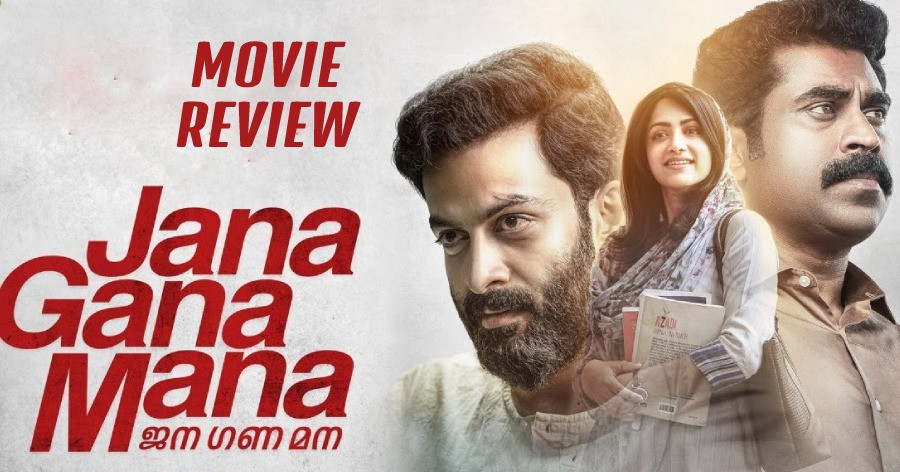 Dijo Jose Antony's Jana Gana Mana opens with a voiceover that says truth always triumphs. That is what we are taught to believe, right? But is that statement itself true? Because, today, aren't we surrounded by so many lies and manipulations and so much militant wokeness that the "truth" is no longer tangible. Take the case of a married woman who died while eloping with her lover. The news appears on the last page. Take the case of a college professor who is murdered. That becomes the headline. Both are women. Both are dead. But isn't there a discrimination being made based on the "assumed character" of the individual? Take another instance. Let's say we are asked who is likely to be a criminal: a  fair-complexioned, middle-class looking man vs. a dark-skinned, lower-class (and possibly oppressed-class) man? The film includes us in these situations. It points a finger at not just its bad characters but also the audience.

The audience consists of those armchair critics who become the judge and jury whenever there is a newsworthy event. The audience includes our media, which revels in sensation: whether it is Sushant Singh Rajput or Rohith Vemula. The audience includes organisations that claim to fight for a gender or class or whatever cause, but with their own agenda. The audience includes students who protest and are labelled anti-national and urban Naxals. Most of us think we are doing the right thing, but are we really? Do we have all the facts? And if we don't, are we ensuring that "truth always triumphs"?

This is a fantastic premise, and I wish Sharis Mohammed's writing and Dijo Jose Antony's direction had been equally fantastic. Both these aspects are merely functional and very broad, very A-for-apple. Adding to the feeling of being hammered on the head with the film's emotions is the huge background score by Jakes Bejoy. I don't want to complain too much, because this is an effective and very watchable movie. I am just wondering how much better things would have been if the form had matched the powerful content.

The screenplay does not know how to hold back (especially towards the end, where it tries to do too much) – but there's no denying that the writing has bern thought through. We are in 2014. We see a bit of Prithviraj's story, during what a journalist calls a "sensational case". We then move to 2019. This is another "sensational case," but this time the actor on screen is Suraj Venjaramoodu. At another point, we cut to a hospital with an ailing little girl. We see her grandfather. We are told he is in some kind of problem. But before we can find out what this problem is, we cut away to something else. This is the back-and-forth structure, and we spend a lot of time in the aftermath of the crime. We see the reactions of students, the media. We even get a politics professor who urges his students to join the nationwide protests.

In other words, everyone is convinced they know what the "truth" is – or at least, they think they are on a mission to find out what the "truth" is and punish the people responsible for the crime. And the second half becomes a courtroom drama: in other words, it is set in the actual place where the job of finding out the truth is done. Suraj is a single father. Prithviraj walks with a limp. No one is "perfect". And the facts of the case are not "perfect", either. Just like the truth is evasive in real life, the film, too, keeps pulling the rug from under our feet just as we think we know… the truth.

Jana Gana Mana has two star performances, but because of the ultra-broad filmmaking, Suraj's subtleness fades in front of Prithviraj's sensational and very controlled flamboyance. It's not easy to play to the gallery and yet not do so in an overt fashion: Prithviraj does just that. In every scene, we sense his inner fury, and every second he is on screen, the film goes up several notches. The dialogues, the direction, the writing – everything feels better. Even the pace feels less flabby. And of course, the content is so strong that the film hits hard in the latter portions. There's a line about a Dalit sweeper. There's a passage which repeats the word "rape" and "shock". Had the whole film worked at this level, we would have had a classic, but despite my reservations, I am not complaining. This is a solid drama that makes us think about the nature of truth.

Prabhas and Deepika Padukone's high-budget film to be shot with revolutionary new tech - Here's the scoop!!

Here's an exciting new video from VIJAY DEVERAKONDA's next - all you need to know! Check Out!

Jayam Ravi and Manithan director to join hands for the second time - Here's the announcement!

The Thrilling TRAILER from PRITHVIRAJ's Jana Gana Mana is out now - check out!!

Vijay Deverakonda officially announces his next big film - catch the first glimpse of the film here!

Vijay Deverakonda stuns everyone with his latest transformation in a brand new look - Check out!