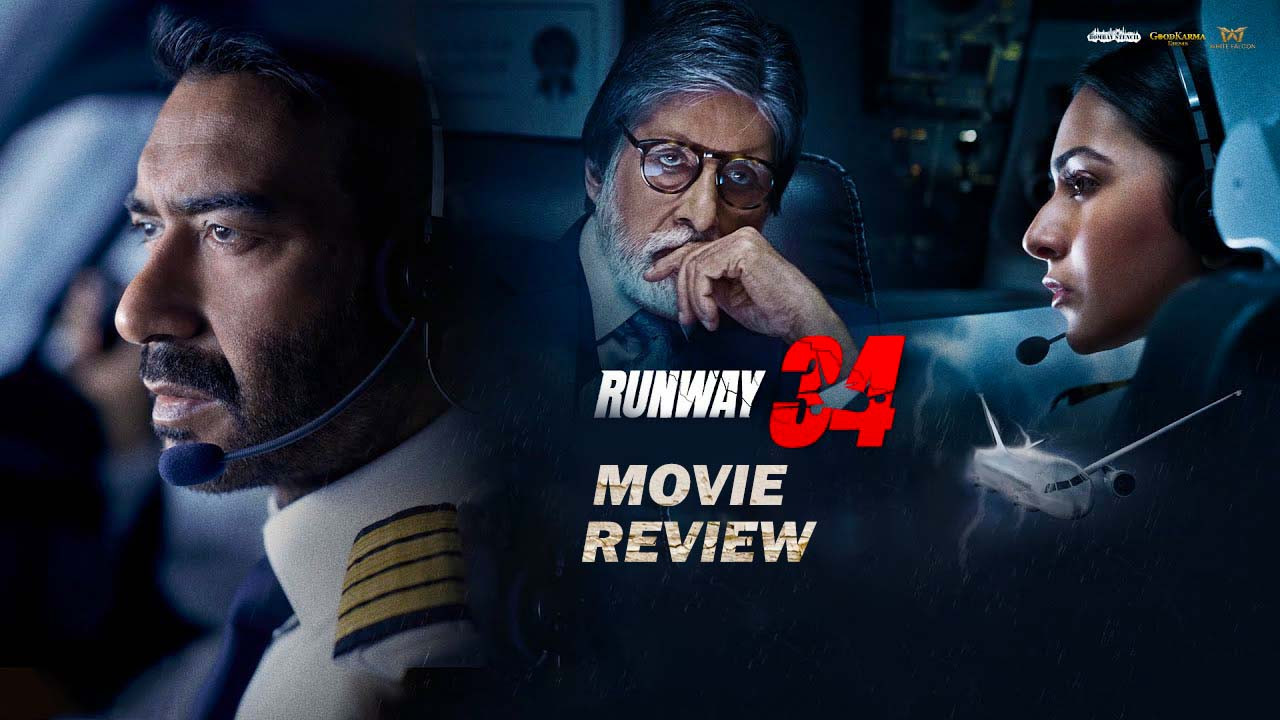 The first half of Runway 34 is dedicated to proving that the airline captain Ajay Devgn plays is an alpha male. No, literally. When we see him for the first time, an ad jingle-like bit in the background goes "He's an alpha man." Which makes me wonder: had he been a little less manly, would he be a beta man? Are there more categories of manliness: gamma men, delta men? Ajay proves his alpha man status by smoking non-stop, or by going to a nightclub and picking up a woman with this line. She asks what she'll get if she goes with him. He says, "My company." Um… okay! Another quality of the alpha man is apparently that he has a photographic memory. You do not want him near your computer's history.

This alpha man is a pilot. No, sorry. He is an "ace pilot", which is what Rakul Preet Singh says when introduced to him. She is his co-pilot on a flight from Dubai to Kochi, and up to the interval point, we see how these two navigate really bad weather and land the plane. All of this should have been tense, nail-biting stuff - but it looks generic due to the generic visual effects, the generic dialogues, and the generic characters. Ajay has a wife and daughter, but the film would have been no different even if he'd been a single alpha man. Even the plane set is generic. It only seems to have economy class. Maybe they thought we would not sympathise as much with the champagne-sippers in business or first class. Instead, we get a young mother with an infant, and even before taking off, she tells her husband she is scared because this is her first time on a plane. This is not spoon-feeding. This is shoving a pipe down the audience's throat and hosing the emotions down.

The second half morphs into a kind of courtroom drama, where the Ajay and Rakul characters are subjected to an enquiry. Boman Irani plays the generic owner of the airline, and a highly theatrical Amitabh Bachchan plays the prosecutor who speaks only shuddh Hindi - even when he's referring to a polygraph. All this, again, should be suspenseful and emotional stuff – but it's slow and sluggish, with hardly any surprises. Maybe it's the two-and-a-half hour running time. At a story level, Runway 34 is certainly interesting, but as a film it is flat. Even the little twist at the end is generic. The film is based on a real-life event. The screenplay is like a Wiki page of that event. You see it but you don't really feel it.

Witness the electrifying dance of Jr. NTR and Ram Charan in the 'Naattu Koothu' song in RRR - WATCH VIDEO!

New powerful and inspiring trailer from Abhishek Bachchan's latest venture - Check it out!!