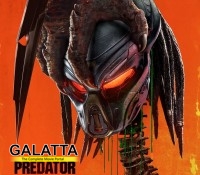 The Predator is an American science fiction action film directed by Shane Black and stars Boyd Holbrook and Olivia Munn in lead roles.

A Predator attacks the general population after arriving on Earth after which chaos ensues. How the scientists and the army deal with the crisis and whether they manage to take it down forms the rest of the story.

Boyd Holbrook is fit and commendable as an army ranger and leads his crew with ease. Olivia Munn has done a fitting job with her expressions especially in scenes that are outright tense and has given a performance that is quite bold. Although there is a supporting cast, they just exist to fill up the gap and do not attract much attention or create any big difference in the overall narrative.

Shane Black’s direction is smart to a relative extent and that is quite visible few scenes which carry a specific knack. The script is extremely thin and there is no detailing on how things fall into place while the screenplay is just inefficient and fails in terms of leaving us satisfied. Apart from a couple of gory action sequences, the films fails to thrill and completely loses its momentum as the story progresses. Although the dialogues are not all that bad, none of the conversations are noteworthy. At no point during the course of the film do we feel an impact. In addition, logic takes a huge hit in several scenes. However, the team needs to be appreciated for spellbinding action sequences which are exceptionally powerful and in tune with being quite realistic.

Despite Henry Jackman’s music being apt for many of the scenes, one wonders if the the signature ‘Predator’ theme could have been included. Larry Fong’s cinematography is an absolute delight and enhances the visual experience with the final product being convincing enough for the eyes as there is only limited VFX. At no point can the editors be blamed for the film's boring moment and they need to be appreciated for giving a package that is almost watchable. Furthermore, the sound design is spectacular and lends to the credibility of the film having a realistic feel.

Verdict :A barely engaging action flick that missed to pack a punch.

The Predator is a English movie. are part of the cast of The Predator. The movie is directed by Shane Black Music is by Henry Jackman . Production Davis Entertainment.