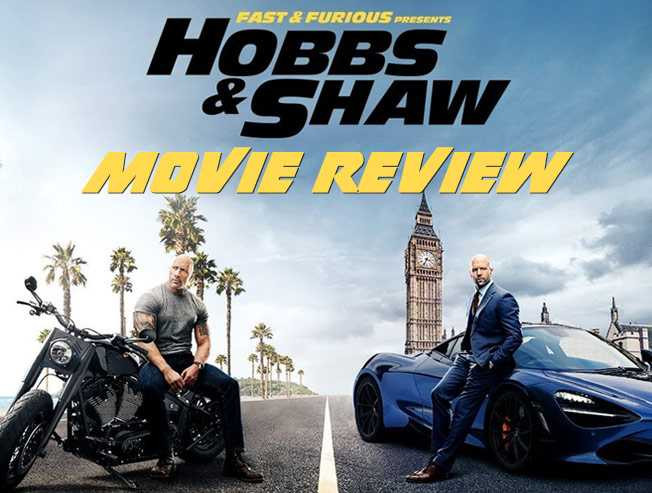 After crossing paths in Furious 7 and The Fate of the Furious, the 7th & 8th installments of the Fast & Furious franchise, Deckard Shaw (Jason Statham) and Luke Hobbs (Dwayne Johnson) are brought together by a sudden turn of events in Fast & Furious Presents: Hobbs & Shaw. The government DSS agent Hobbs and special agent turned renegade Shaw were sworn enemies in previous installments but when an even badder guy - Brixton (Idris Elba) threatens to change the world upside down, they have to set aside their differences and team up. The British Government's secret service - MI6 come to know of a deadly virus - Snowflake and send a team to track and recover it. Agent Hattie Shaw (Vanessa Kirby) is forced to inject herself with the virus when her team is attacked and killed while recovering the virus. Despite their enmity and hatred for each other, Hobbs and Shaw are forced by the US and British governments respectively, to team up. Hobbs tracks down Hattie and comes to know that she is Shaw's sister. This unlikely trio have now been declared terrorists and are being hunted by all the government agencies as well as by Brixton, who is seemingly a superhuman with amazing abilities, including being bullet proof. To know what happens next, watch this movie in the theatres! David Leitch, who has earlier directed a number of movies including John Wick and Deadpool 2, is the director of this spin-off from the Fast & Furious franchise as well. The director has brought together a rather simple tale and included the most important underlying factor of this franchise - "Family matters" and woven an interesting tale from it. The hate-turned-need-turned-respect-turned-camaraderie relationship between Shaw and Hobbs has been beautifully explored. The first half of the movie has very interesting conversations especially the verbal duels between Hobbs and Shaw. The trans-Atlantic cultural and lingual differences have been showcased nicely. Dwayne Johnson is his effervescent muscly self while Jason Statham has brought out the sarcastic, ruthless Shaw wonderfully! Vanessa Kirby is a surprise package and after seeing her in The Crown, it is a sea change in roles for her and she brings about a fresh flavour to the movie. The entire first-half breezes by and provides a number of laugh worthy sequences interlacing the brilliant high-octane action sequences. The first half sets up a lot of expectations for the second half but we find the second half to be meandering a bit too much. The seemingly too much travelling, cliched insertion of familial emotions and the flat and at times hilariously over-the-top action sequences seem to bring about a little drag to the proceedings. The cameos by Ryan Reynolds and Kevin Hart are good value additions to this movie and if they were to appear in future installments of this franchise, it would definitely be good! The dialogues are a major plus for the movie and if fans of the WWE star Roman Reigns had high hopes for their star, they would be disappointed for he doesn't have much to do in the movie. The family sentiments, especially the mother sequences involving both Hobbs and Shaw give a heart-warming feel but seem to have been overplayed at times, especially in the case of Hobbs. Dame Helen Mirren as Shaw's mother impresses in the few scenes she appears in, as does the child artiste who appears as Hobbs' daughter.

Verdict: An action-packed fun ride that has set the premise for a new franchise as a spin-off from Fast & Furious!

EXCITING NEWS - New title and logo of the next Fast and Furious part revealed! Have a look!