In 'Iravin Nizhal', R Parthiban pulls off a technical feat that's always fascinating, even if the film remains a bit distant 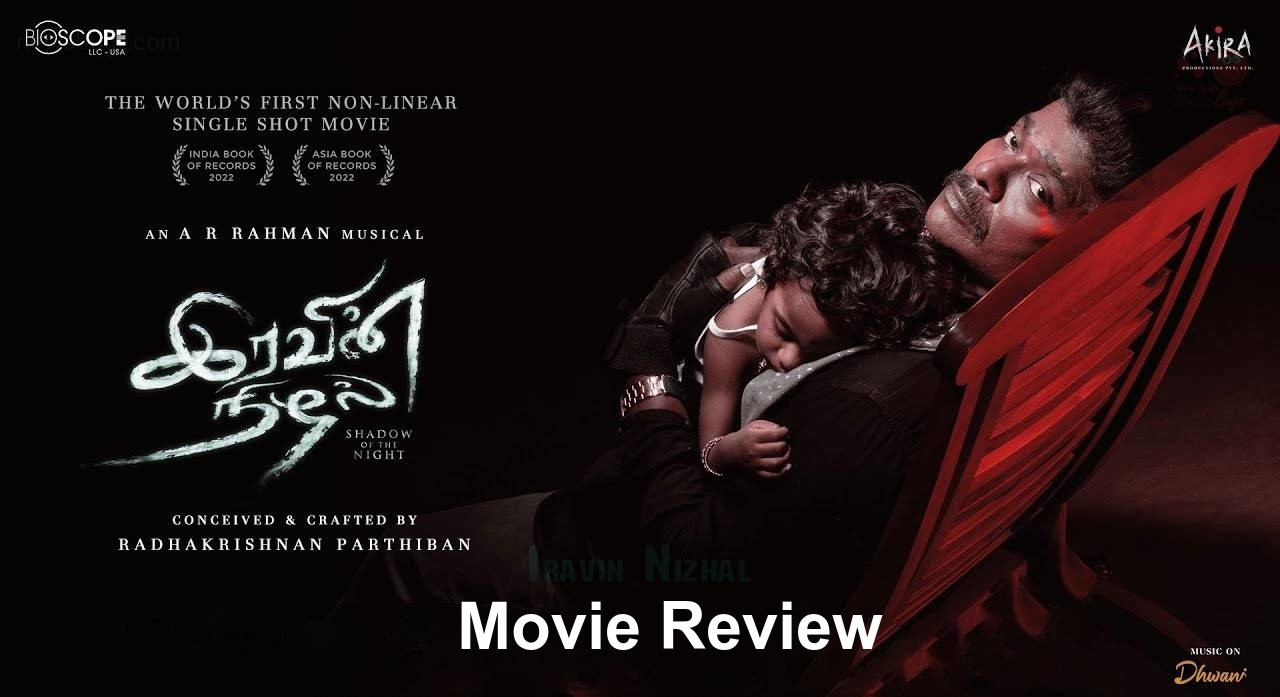 R Parthiban is known for being different. His latest feature, Iravin Nizhal, is the world's first non-linear single-shot film. Now, let’s break that up and look at the “single-shot” part first. Everything is captured in one 90-odd-minute camera move around production designer Vijaimurugan's cleverly constructed sets. Essentially, the cinematographer Arthur A Wilson and his brilliant team started moving the camera when the story began and stopped moving the camera only when it ended. So, there is no editing at all. Whatever footage was captured in that 90-odd-minute camera move, that is the movie we see. Imagine the problems. First, the lighting keeps varying from one set to the adjacent one, depending on the event described in the screenplay. You may have to light a set to resemble daylight and before the camera moves to the next set, you may have to simulate night. If any single thing goes wrong, whether in the eighth minute or the eightieth minute of the shoot, you have to start reshooting the entire film all over again – as opposed to the usual way of filmmaking, where a film is made of several little blocks of scenes and you would just reshoot a single scene.

Iravin Nizhal is therefore a massive technical feat – and also a massive human feat of perseverance and endurance. But there is also the question of why. Why go through all this trouble? Is it just a gimmick? ("I am R Parthiban! Let's do something new!") Or is there a natural, organic reason for this single-shot technique? The answer lies in the storyline. Parthiban plays a money lender who finances films at exorbitant interest rates. But when something goes wrong, he picks up a gun and begins to travel, both physically and mentally. The physical travel takes him from one place to another. And while this happens, the mental travel takes him from one memory to another (in cinema terms, you could call these flashbacks). So the non-stop travelling by the camera reflects this man's non-stop physical travels, his non-stop mental travels.

And what about the film's second claim to fame, the nonlinear nature of the storytelling? What this means is that the story keeps alternating between the past and the present, and this device, too, is completely justified. When we reflect on the past, events are not going to come rushing back in sequential order. They are going to be a jumble of “nonlinear” memories. In an early scene, we hear a Telugu song. The reason for the inclusion of this language comes several scenes later. We get a scene where the protagonist buries someone. Again, the continuation of this incident comes much later. (So it’s not just the film that is nonlinear; even this flashback is nonlinear.) And in another instance, the present-day protagonist actually enters a memory, a flashback – it reminds us of how, in real life, we wish we had been at some place physically to stop something bad from happening.

You know how they say your entire life flashes before your eyes before you die? That’s the overall effect of Iravin Nizhal. Like Otha Seruppu, the effect is stagy – this is not a "naturalistic" film. It is a stylised film, with characters that include a fake godman and godwoman, locations that include many places of worship, women who include several lovers, and adult content that includes male and female nudity in addition to sodomy and a ton of swear words. The downsides? Parthiban's trademark wordplay, though very entertaining, seems out of sync with the very serious nature of this movie. "Sirippaaleye adichaa. Adhukku seruppaaleye adichirukkalam." It's a clever line. But it also puts some distance between the audience and the characters, who are as serious as the film. And because the events come at us so fast, some characters like the godman do not register at all.

But at no point could I tear my eyes away – or my ears. AR Rahman's music and score are terrific. The first sounds we hear in the film resemble a lullaby or a devotional piece. (Later, we will see that this is a bit from the song, "Paavam seyyathiru maname".) This humming soon deepens with cello notes and then gets corrupted with discordant voices, and we slip into the song "Kaayam". The song is chillingly discordant and it is the perfect prelude to the life of this discordant man. Rahman does this throughout. I loved the touch of starting a gaana song with a soft, clarinet-like sound, and in general, the score either underlines the razor-like cruelties in the screenplay or applies a balm on wounds.

Iravin Nizhal has a trippy, sensory feel. There is an incident of ganja-selling and we sense those fumes throughout the film. It is sometimes surreal. It is sometimes hallucinatory. It is always fascinating. The cast includes Varalaxmi Sarathkumar, Robo Shankar, Priyanka Ruth, Brigida Saga, but the film is all Parthiban. The first time we see him, he is out of focus. Slowly, his image becomes clearer. In this single stretch, we know what this is going to be about: a mystery man who we finally get to understand. I was a little divided about Parthiban's decision to include the film's making-of video, which shows how Iravin Nizhal was pulled off. (Should a magician reveal his tricks and destroy the illusion?) But given the film's experimental nature, this video adds another layer of experiment. Cinema is an art form. People need to be educated about it. And what better teacher than someone who has never been afraid to break the grammar?

Parthiban's Iravin Nizhal Intriguing First Glimpse is out - try not to miss this! | A.R.Rahman