R Madhavan's 'Rocketry: The Nambi Effect' tries to do too much, resulting in very little insight into its protagonist 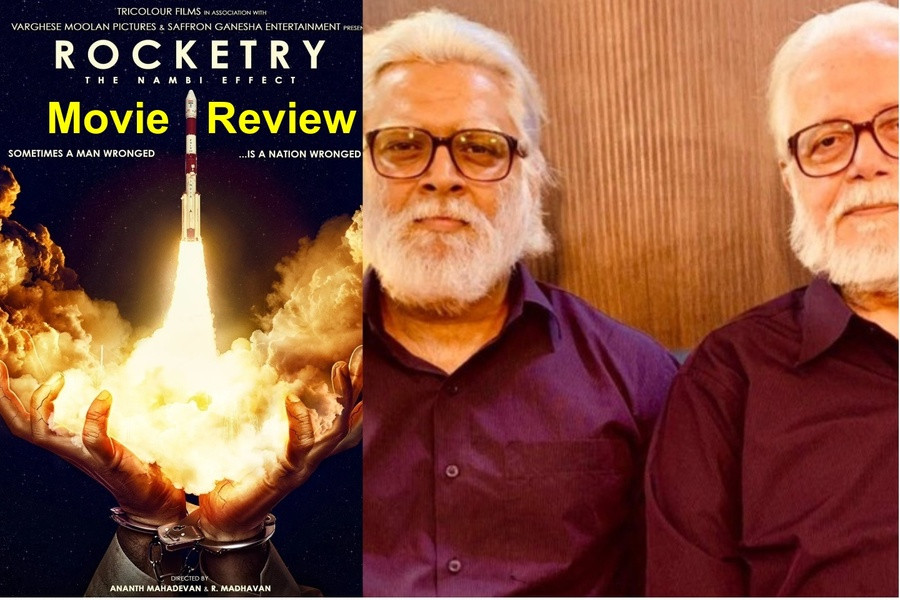 Biopics are notoriously hard to crack because you are trying to reduce the grand span of a person's life to a two-and-a-half hour movie. And that's why the best biopics are those that give us a sense of the person through a limited set of events: a great example is Danny Boyle's 2015 biopic of Steve Jobs. In Rocketry: The Nambi Effect, R Madhavan makes his writing and directing debut, while also effectively playing Nambi Narayanan, the scientist who accomplished great things for ISRO, and then fought for justice after being falsely accused of espionage. Unlike Steve Jobs, this film is overstuffed. Let's take the first half. It wants to show us how this out-of-the-box thinker developed a rocket engine. We seem to get every single step of this journey, which gives the impression of sitting through an extended, jargon-filled Physics lesson delivered by a superstar who did everything single-handedly despite having a large team behind him. Maybe that is what happened in real life. But on screen, this results in a loss of nuance.

We see glimpses of Nambi's family early on (Simran plays his wife), but they vanish for large periods of time. We get scenes of Nambi being branded a traitor, but we have to wait for the last quarter of the narrative to return to this angle. The broad emotional beats are in place. (1) Nambi was a devout family man. (2) Nambi rejected a NASA offer to stay with ISRO. (3) Nambi's commitment to his work, his mission, was such that he betrayed a friend. But these broad emotional beats don't transform into insights into his personality. So yes, he was a devout family man, but how did he reconcile his science and his faith, and how much did he miss his family every time he was away. So yes, he rejected the NASA offer, but the scene is written so flippantly that we wonder if he ever thought about what he was giving up, given the dire financial situation of ISRO at the time. So yes, he betrayed the friend, but did he have sleepless nights about this or did he just file it away as something that just had to be done?

These points are not totally overlooked, but the generic and conventional nature of the writing never lets you forge a deep and true emotional connection with Nambi Narayanan. Again, the reason is time. Did we really need the scene where Nambi corrects his college professor? Did we really need the stretch where he goes to Scotland, and meets someone who repents what the British did to India? These should have been footnotes – casually mentioned – so that the characters around Nambi got more screen time. Because the biopic of a person is also partly the biopic of the people around them. I will admit, though, that my reaction to the first half could be the result of a lot of very bad foreign actors whose voices are dubbed in Tamil, which brings in a huge distance between the audience and the events on screen.

I wondered if a lot of this detail could have been compressed into the television interview that Suriya (playing himself) conducts. Instead, this becomes a simple framing device that adds nothing to the film. I mean, if you wanted a framing device, why not use Nambi in jail trying to establish his innocence, as the other details of his great achievements are woven in as memories or conversations with his interrogators. Just a thought. Because when a screenplay does not work, you begin imagining your own scenarios. At least this way, we would have really experienced Nambi's imprisonment as something more than the simple-minded melodrama we have now, with bizarre James Bond-like action-adventure touches.

It is easy to see why Nambi's story inspired Madhavan – it is not just an important part of modern Indian history but also material for riveting cinema. But Rocketry doesn't make us see Nambi Narayanan the way Madhavan does. The man remains aloof, unlike – to take another biopic about a troubled genius – the Russell Crowe character in A Beautiful Mind. The film's best scene has the real-life Nambi refusing an apology. With sadness and quiet anger, he says: if I am innocent, then there must be a guilty party. Who is that? The sentiment stings. In that instant, we see the man Madhavan saw and was inspired by, the man who was a hero until he wasn't. The rest of the time, we see a man who needed a better biopic.

WOW: Suriya becomes the first-ever South Indian actor to get this huge honour - an invite from the OSCARS!

From Maddy to Nambi | Check out the epic transformation of R. Madhavan for Rocketry!!

Special update on Madhavan's debut directorial - Rocketry | here is what you need to know!

Madhavan opens up about directing one more film after Rocketry: The Nambi Effect - Here's what he had to say!

As Thalapathy Vijay is celebrating his birthday today, here are 11 of his best and memorable performances till date!

Know how much Suriya charged for his special cameo in this upcoming biggie? Check Out!

Rocketry: The Nambi Effect Making video - Madhavan reveals why he deleted the first draft of the script!