Rakshit Shetty and the labrador are terrific in Kiranraj K's '777 Charlie', but the film's ambition is not matched by the execution 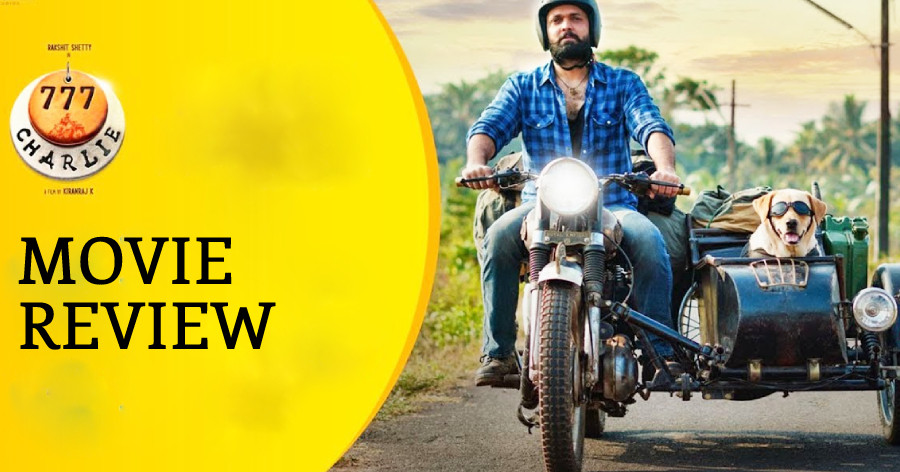 Cast : Rakshit Shetty, Bobby Simhaa, Danish Sait, Charlie,
Production : Paramvah Studios
Director : Kiranraj K
Music Director : Nobin Paul
Each episode should lead organically to the next one, but we get the feel of standalone scenes, some of which could be cut with no harm to this overlong movie.

The premise of Kiranraj K's 777 Charlie is summed up in the first lines we hear: If you are lucky, a dog will come into your life and steal your heart and change everything. If you are a dog lover or a dog parent, this is hardly news. But the character Rakshit Shetty plays is neither. Forget dogs, he doesn't love anyone. He lives alone, with recurring nightmares about an incident that changed his life forever. He survives on beer, cigarettes and idlis. The point isn't that he doesn't have a dosa for a change. The point is that he doesn't care enough to make any changes in life. He is a welder, and he makes you think he'd rather be with metal than men. There are many colleagues at work, but his only companion during lunchtime is himself.

Charlie, the labrador, is his mirror-image in a few respects. She, too, has suffered childhood trauma, and she, too, is all alone. And it doesn't take a genius to figure out that the man and the dog are going to be thrown together, and that the dog will end up transforming the man. But that is just the plot line, and Kiranraj is after something much more ambitious. He gives this odd couple two journeys. The first is the internal journey of Rakshit's transformation. The second is an external journey, at which point 777 Charlie becomes a road movie. And these two journeys are reciprocal. In the internal journey, the dog is the doer. She does something for Rakshit. In the external journey, the man becomes the doer. He does something for Charlie.

I was not prepared for this. I thought this would be a cutesy-wootsy story that would make us go awww every time the dog does something. But 777 Charlie is really a drama. I mean, consider the fact that Rakshit is named Dharma, and he ends up in the snow-capped mountains with a dog – like Dharmaraja (or Yudhishtira) in the Mahabharata, having left behind his worldly possessions and undertaking a final journey in a sense. A subplot about inbreeding comes in really early, changing our entire perception of the film. There's even a sense of cinema history, with nods to both Charlie Chaplin and Buster Keaton.

Some of the writing is terrific. When an angry Rakshit barges into the house of a bad man who is connected to Charlie, you expect an action scene. Instead, we get a bit of comedy. The entire action stretch that would have happened is reduced to just the end result. Best of all is that the story does not treat its central conceit as a "man and dog" narrative. Charlie is not a "pet". They come across like two people in a relationship, which is exactly why people who have dogs call themselves dog parents and not dog owners. Replace the dog with a human, and 777 Charlie would have hit the same emotional beats. In other words, the film doesn't condescend to Charlie, but treats her like Rakshit's equal. She is an equal part of the journey. Thanks to her, even his recurrent nightmare goes away.

With all this, 777 Charlie should have been much better. But the writing in the other parts does not work. A road movie is inherently episodic, and these episodes should shine, with actors like Sangeetha Sringeri, Danish Sait, Bobby Simha and Raj B Shetty making guest appearances. But a lot of these bits fall flat. They should have been written more interestingly, with the kind of quirk we saw in that action sequence that was not an action sequence. The low point is a dog show, and you get the feeling of the film being prolonged and hitting the same notes over and over.

There is a spiritual dimension as well, and perhaps that should have been the main thread. Because in this form, it gets lost amidst the other episodes. The film's various ideas don't quite click into place. Each episode should lead organically to the next one and strengthen the narrative, but we get the feel of standalone scenes, some of which could be cut with no harm to this overlong movie. What keeps us watching is the central relationship. No dog is capable of giving a bad performance, and labradors are among the most camera-friendly of canines. And Rakshit is terrific. He doesn't overdo either the gruffness or the sentimentality. With the writer-director, he keeps the graph of the character true – progressing from frowns to mild half-smiles to full-throated laughter. 777 Charlie is by no means a lazy movie, but it ends up more interesting for what it wants to be than what it actually is.

New heartwarming trailer of Charlie 777 - relationship between a man and his dog! Check Out!