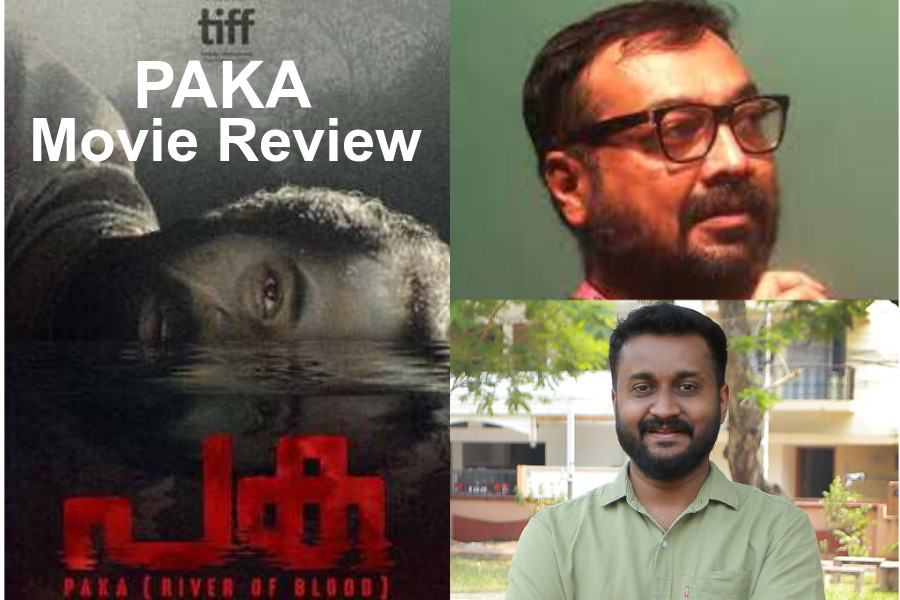 Cast : Basil Paulose, Vinitha Koshy, Nithin George, Athul John, Jose Kizhakkkan,
Production : Studio 99
Director : Nithin Lukose
Music Director : Faizal Ahamed
The walls of both family houses are filled with pictures of those who have been murdered from times before the events of this film began. These walls are a testament to the increasing violence between the two families.

Paka is structured on the classic Romeo-Juliet story: in this story, they are named Johnny (Basil Paulose) and Anna (Vinitha Koshy). Given the generations of extremely bloody conflict between their respective families, you may wonder how Johnny and Anna ever fell in love – especially when someone from Johnny’s family killed Anna’s father. But Nithin Lukose, the writer and director, does something very interesting. He takes the love story for granted, and he pushes it to the background. Johnny and Anna fell in love, and that's it. There are no conventional romantic scenes, and even the scenes we do get between Johnny and Anna are always troubled. Instead of sweet nothings, they talk about nightmares and missed marriage appointments at the registrar’s office.

The English title of Paka is “River Of Blood”, and it’s evident from the very first scene. An old man  with an enormous, silvery moustache dives into a river to retrieve a corpse. Nobody knows how the man died. The river is filled with such bodies, many of them mutilated and stuffed into sacks. This dead man was perhaps from some other warring family. Maybe this village is filled with Romeos and Juliets apart from the specific Romeo and Juliet we are invited to focus on.

Why choose the river as a dumping ground, as a graveyard for bodies? “Because it is thirsty,” says a witch-like old woman, whose age has not diminished her desire for revenge. This old woman lies in a bed in a tiny room with one window. She does not like the window being opened. Maybe she is afraid her desire for vengeance may fly out into the open air. It’s almost Shakespearean. This is a movie where there are even ghosts. Only they seem to be at peace, because they are now beyond the cycle of revenge.

Paka is a film filled with echoes. The screenplay is cyclical in the sense that the same thing seems to happen over and over. One side kills someone from the other side, stuffs him into a sack, and tosses him into the river. Then, the other side does the same. And again. And again. The narrative gets going when an uncle of Johnny comes back to the village after he’s released from prison. Even here, there’s something cyclical. He comes by a long road at the side of which there’s a tea shop owner. The same tea shop owner later becomes the first person to spot another man coming through that long road. The cyclical screenplay extends to a man being devoured by the very species of animal he once killed.

Paka has been filled with tragedy till the return of the uncle, and now it becomes even more tragic. This man is genuinely remorseful for what he’s done. He goes to the extent of apologising to those affected by his actions. But then, he may have changed but those who want revenge for what he did haven’t. The walls of both family houses are filled with pictures of those who have been murdered from times before the events of this film began. These walls are a testament to the increasing violence between the two families. The irony is that all of this bloodshed occurs against constant reminders of Christianity. We see several crucifixes. There’s a nun. There’s a Christian festival, when, apparently, murders should not happen. The hero wears a cross in a chain around his neck. And so forth.

The film is filled with lovely touches. For example, Johnny doesn’t seem to be much of a joiner in events. When others are bathing in the village pond, he refuses to get inside when they invite him. When his uncle offers him booze, he says that he’s quite happy and doesn’t want to. This sets him apart as one of those people in whose veins the blood of vengeance isn’t flowing. Or does it? Another point I really liked was when Anna gets a gun. It’s not overexplained, because you just take a look at the situation and her face, and you kind of know what’s happening.

There are the occasional comic touches like the scene with a Kannada-speaking sex worker but Paka is a very serious movie. Johnny, a younger person, is the pacifist while his grandmother actively endorses revenge at every stage. Similarly, there’s a grandfather-like figure in Anna’s family who wants revenge all the time. How can the younger generation begin to forgive if the older generation won’t allow them to forget? But what could have been a massive melodrama is treated in a minimalistic way. Even Faizal Ahamed’s excellent score is minimalistic: we only hear the occasional shot of drums or a burst of acoustic guitar. That’s enough.

The work of cinematographer Srikanth Kabothu is exceptionally subdued. Usually when you want to show violence, you move the camera a lot, as a way of mirroring the violence on screen. But here, everything is kept as still as the river of blood. Almost all the actors are superb; you see them and you know what they’re thinking and what they stand for. We don’t need big backstories. As for the writing, it gives us something we’ve seen a hundred times: namely, a revenge story between feuding families. But by cutting off the love and focusing simply on revenge, Paka becomes less about people than about their primal nature. At the end, Johnny does something that makes us think the revenge cycle is over. The next shot suggests something else. Johnny’s uncle  says that the worst thing is the pain of seeing your loved ones pay for your sins. But who’s listening?

Popular veteran actress to turn a social worker in her next!

2.0 Oscar winner to become director next

"A Deliberate Attempt To Malign My Image": Nivetha Pethuraj

Nazriya had to be convinced a lot - Sathyashiva