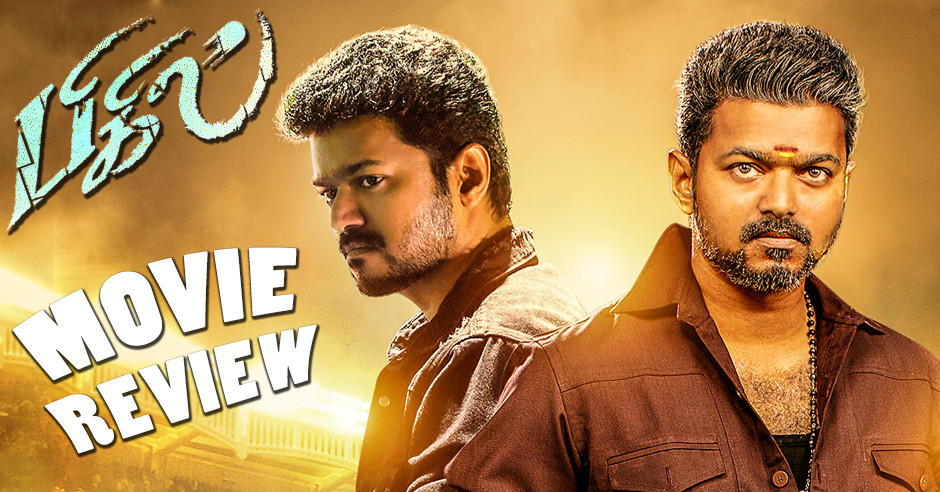 Thalapathy Vijay's Bigil is easily the most expected and the biggest Tamil film of this year. Amidst enormous expectations from the fans, the film has finally hit the screens today ahead of the Diwali festival. Directed by the young and successful Atlee, Bigil is a film that is full of celebration on all sides.

Michael aka Bigil (Thalapathy Vijay) is an ambitious football player who sets on a mission to fulfill the dream of his father Rayappan (Vijay again) and his friend Kathir (Kathir). Bigil is all about coach Michael's journey in making his women's football team succeed in their championship tournament. The film also talks about the politics that is involved in the sport of football.

When Vijay is in the foreground, you need not worry about the film's screen presence as he takes complete charge. He is a delight to watch on screen and the audience are sure to get attracted to his casual and energetic performance. Unlike his previous films, Vijay gets to play different characters with different features and looks through Bigil and he aces them neatly. Despite having many other actors, Bigil has ample number of 'Vijay' moments that are sure to earn whistles from the audience. We know the love Atlee has, on Vijay, and that is evident through the scenes that he's written for him. Michael's intro fight sequence sets the right kind of mood for the fans and from thereon, the proceedings go smooth.

There are a few slips and misses here and there in both the halves, but it gets saved to an extent through Vijay's screen presence and the emotions. Talking about the other stars, Nayanthara gets decent screen space, but unfortunately, it is a very weakly written character that suffers from all the commercial compromises. Her on screen chemistry with Vijay looks good. Jackie Shroff, despite having a stylish makeover, is a templated antagonist, who never gives a strong fight to the protagonist. Kathir also has got a brief role that doesn’t travel along and one would feel that his potential hasn’t been used. Similarly, Vivekh, Yogi Babu, and Anandaraj have also been wasted with no scope to score. With Vijay taking the lead, these actors have to take the backseat with minimal screen time and brief roles.

Among the girls, Varsha Bollamma and Reba Monica John gets important roles and they make wise use of this big ticket opportunity. Indraja Shankar’s character is sure to connect with the masses. Other girls like Indhuja and Amritha Aiyer do their bit neatly.

The first half has the right mix of emotional and mass moments. The football match sequences involving Vijay lacks the curiosity factor because you know who is leading the team from the front. Later in the second half of the film, Michael says football is a team sport, but when you recollect, you see only Bigil scoring the goals in the flashback portions. The second half leaves a better impact among the audience and the emotions work very well. Especially, the film holds strong women emotions and it has the potential to make a mark among the family audience. With a top actor like Vijay on board, these important messages about women empowerment will reach effectively to a layman. The placement of ‘Singappenney’ song right when Reba confronts her predator is bang on. However, the placement of ‘Unakkaga’ song is a worry.

Director Atlee is a master in packaging a film and Bigil is one more example of it. Bigil does have its own dull moments that keep the engagement factor low, but on an overall picture, the film is definitely enjoyable and entertaining that also holds a strong emotion. Music Director A.R.Rahman holds the audience's energy through his pulsating background score and his 'thara local' touches are enjoyable, suiting the film's setting. His re-recording in the football match sequences lighten up the mood for the audience and his work has proven to be a positive. As like his first film, GK Vishnu has delivered a very impressive work capturing the moments beautifully. Vishnu has gone on a roller coaster ride in the football match scenes and the way it has been executed, deserves an applause for sure. The color palette used in the film gels neatly with the mood of the scene. Art Director Muthuraj's work is quite heavy in this film as his team has entirely constructed a full football stadium set and that has been wisely used. The stadium looks realistic and has been a silent support to the film.

On the flip side, the dubbing (voice modulation and tone) of Rayappan's character is inconsistent. The North Madras dialect isn’t used after a certain point in time and you wonder why it had to be done. The VFX work in the football match sequences lack perfection. Also, there is no sync between the costumes and the dialect. You see the actors wearing branded quality attires and because of that, you seem to lack the nativity. The romantic portions between Vijay and Nayanthara are uninteresting and boring. One would have wanted to see more of the coaching portions involving Vijay and the girls. as you don’t feel the emotional connect between them. The football sequences, despite being well shot, doesn't convey the tension and the excitement to the audience at many places. This is due to the treatment of the sports on a very surface level. Not just the football scenes, many other portions are treated on a surface level with logic taking backseat.

There are a few dejavu moments and you seem to feel the resemblances of other films. The audience are sure to get the traces of a few other mainstream sports films in the coaching sequences. Had that got a fresher approach, the screenplay would have been interesting to watch. The main conflict of the film is very weak and wafer thin. Also, you are never explained as to why there was a conflict between Rayappan and Alex until the very end. The makers have tried to infuse a lot of messages through a single film, but only a few work well. If predictability is a worry for you, then Bigil might appeal one step lower, but if that isn't a problem, Bigil can surely be enjoyed. In a nutshell, Bigil is an entertaining and inspiring sports drama that works due to its packaging.

Check out the interesting teaser of Bigil Sensation Varsha's next film - Don't miss!

Bigil sensation to get married soon - boyfriend makes a romantic proposal! Check Out!