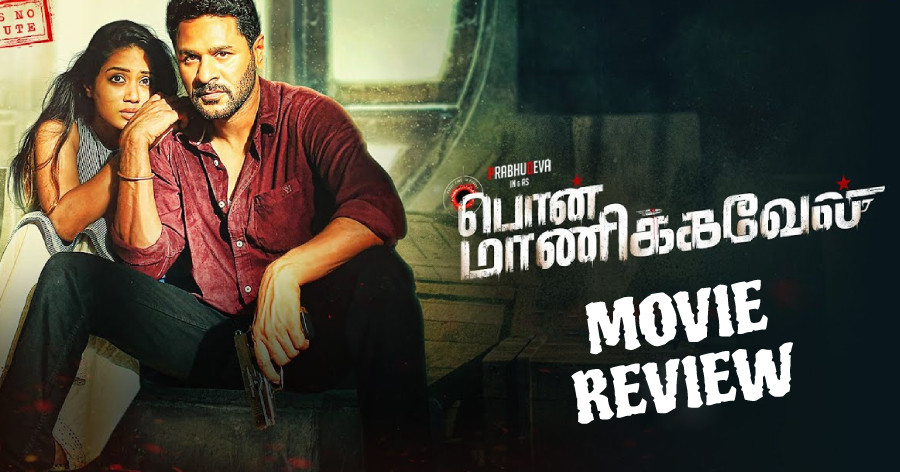 Prabhu Deva's long awaited Pon Manickavel is finally out on the Disney + Hotstar OTT platform. Pon Manickavel marks Prabhu Deva's first film as a police officer and it is directed by AC Mugil Chellappan. Nivetha Pethuraj plays the female lead in this action drama. How has the film fared? Read on to know!

STORY:
Pon Manickavel (Prabhu Deva), a honest police officer and a gun specialist, is given an assignment to solve the mystery behind the deaths of a High Court judge and a Police officer. The course of events that follow through the process of nabbing the accused forms the rest of the plot of Pon Manickavel.

SCREENPLAY, DIALOGUES & DIRECTION:
Pon Manickavel follows a templated screenplay pattern that we've seen in action/cop films - a murder scene, hero entering into the picture to solve the mystery, hero's romance with the heroine, a romantic song between the leads, investigation of the case, a twist in the interval, an item song just after the interval, a slight setback for the hero, his comeback, unravelling of the killer, and an action-packed climax fight. The problem with Pon Manickavel is its largely predictable screenplay and as a result of which we don't really get tricked by the twists. The film also reminds us of several other superhit mass entertainers, thereby lacking the freshness.

When you see a cop film, you tend to expect the investigation scenes to keep you hooked, but what we get in Pon Manickavel is nothing, but disappointment. The writing of the characters is weak - especially the villains who don't have any dimension. They never pose a threat to the protagonist and it seems to be a cakewalk for him to nab the villains. The uninteresting romance and comedies add to the worry. The intention of the makers is not clearly known - as the film neither carries a solid message nor engages you with a tight screenplay. With a refreshing screenplay packed with engaging scenes and exciting twists, Pon Manickavel would have been an enjoyable affair.

CAST:
Prabhu Deva delivers a casual performance that is apt for the character and he scores well with the action moves. Nivetha Pethuraj does her part well but it would have been better if her character had more depth and significance. Suresh Chandra Menon as a business tycoon fits the bill, while Mahendran is earnest in a short role.

TECHNICAL:
D Imman's songs do not have his trademark punch, while the background score is quite okay, except for a few action blocks where the music is loud and jarring. KG Venkatesh's cinematography and Shivanandeeswaran's edit are functional.

SO?
Pon Manickavel fails to captivate the audience because of its old fashioned templated treatment.

Verdict Pon Manickavel is a disappointing templated commercial drama that offers nothing new or exciting!