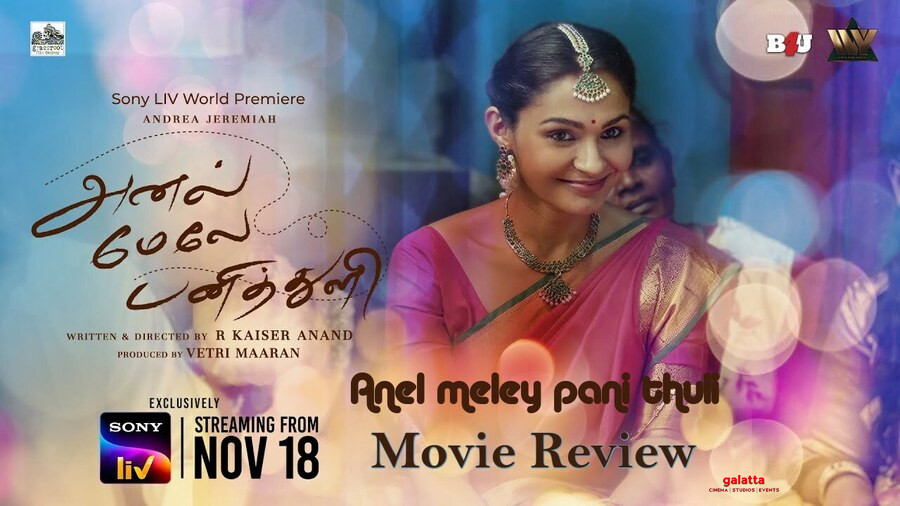 Cast : Andrea Jeremiah, Aadhav Kannadasan,
Production : Grass Root Film Company
Director : R. Kaiser Anand
Music Director : Santhosh Narayanan
There are many good points – both narratively, and with regard to character – in this film produced by Vetri Maaran. But everything feels like a “list of things to be included” rather than something organically woven through a script.

Andrea Jermiah plays a sports-store manager named Mathi in R Kaiser Anand’s Anel Meley Pani Thuli. I liked this touch. The real-life Andrea comes across as a strong personality, and she pours that strength into Mathi. The fact that Mathi is in track pants and working in a place that sells work-out equipment adds to her sporting past, which she had to give up. And yet, she has somehow found a way back to be in sports, even if only through a store. Like I said, I liked this touch, this reminder of her determination, her quiet strength in finding a way to do what she wants to do. Mathi demonstrates this strength in a scene where a staff-girl is being harassed by the man she loved, before discovering he was a shady character. The man barges into the store. After some commotion, Mathi has him thrown out. Later, her boss asks her, “Why do you hire women who create these problems?” Mathi replies, “But it’s the guy who’s creating the problem.”

In other words, the manager – like most of society – just wants an easy status quo. He wants his business to keep going smoothly. But Mathi also wants to do what is right – and why should the staff-girl suffer (by getting fired) because she made an unfortunate decision about a guy? A little later, we see Mathi’s strength again, in an incident involving another man. Again, she wants to do what is right. And again, she will not tolerate this man’s wrongdoing. Whether it’s in the case of the staff-girl being harassed or this second man who pleads with Mathi for forgiveness, “no means no”. This strength that Mathi possesses leads her to Kodaikanal for a wedding, and makes her go sightseeing all alone – and she ends up raped. (None of this is a surprise because the film’s very first image alerts us to this development.)

So is the film trying to say that, no matter how bold and determined and strong a woman is, she can always be “put in her place” by men? No. Because even after this, Mathi continues to show her unwavering strength. She wanted justice for that harassed staff-girl. She wanted justice in the case of that second man. And now, she wants justice for herself. And yet, the film is at its strongest when it depicts Mathi’s temporary loss of strength after the traumatic incident. Her self-confidence is shaken. At least for a while, her core is shattered – she cannot deal with men in power the way she dealt with men when she was in power, at the sporting goods store. For the first time in the film, we see fear in her eyes.

There are many good points – both narratively, and with regard to character – in Anel Meley Pani Thuli, produced by Vetri Maaran. But the film needed much better writing. The way Mathi realises who the perpetrators are (through a series of too-neat clues presented in a row), or the way the perpetrators are caught later, or the way the System threatens Mathi and her fiancé (Aadhav Kannadasan), or the red herrings, or the reason the perpetrators were present at the crime site – all of this is too conveniently written. The film wants to make a point and it makes that point cleanly - but there is very little flavour and a lot of emphatic dialogue. The writing is balanced. For every bad cop, there is a good cop, like the one played by Anupama Kumar. (Like Mathi, she’s a strong woman who is in charge.) For everyone insensitive to Mathi’s plight, there are those who support her. The bad men are balanced out by truly good men. But everything feels like a “list of things to be included” rather than something organically woven through a script.

The crux of the film lies in two superb lines. The first one’s where the fiancé says he’s not sure what he’s feeling. This is a superb touch, a reminder that traumatic incidents can result in a mix of confusing emotions even in the people around the survivor. The second line is the one where Mathi says it’s her body, and only she has the right to use it as a weapon – that is, no one else can use it as a weapon against her. But these lines come off like something read off a script than something that comes after experience. It would have been so much better had we been allowed to soak in these experiences, had we gotten a keener insight into these people – like how we get to (briefly) know the cop beautifully played by Azhagam Perumal. He has a young daughter, a large family. But even while displaying force at the police station, he’s almost apologetic about what he’s doing. That little character shade is what transforms a caricature into a flesh-and-blood character, and that’s what this well-intentioned film needed more of.