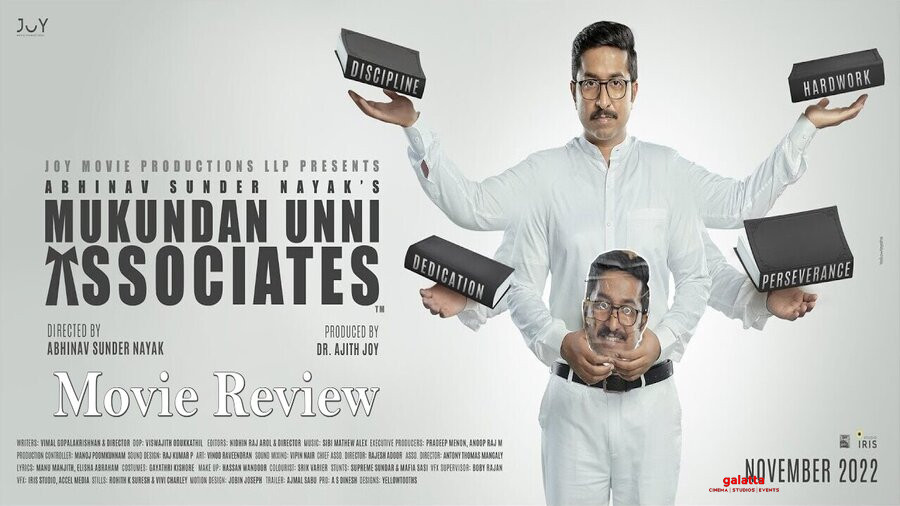 Rarely has the "mind voice" been used as well as in Abhinav Sunder Nayak's Mukundan Unni Associates, where a superb Vineeth Sreenivasan plays the titular character. Imagine this most gentle of actors saying this in his mind voice: "This imbecile is getting on my nerves." Imagine the mind voice using GRE-thesaurus words like "pristine" and "exquisite". The joke is compounded by the fact that Mukundan looks like the last person on earth who'd use these words. But there's another point to this mind voice, a more serious one. The inner Mukundan is a more sophisticated man than the bumbling man we see on the outside – at least at first. He dreams of being a successful lawyer, but he just can't get a case. The earth, shown as an animated graphic, keeps spinning. Time keeps passing. But Mukundan stays where he is.

Looking at this early version of Mukundan, it's hard to associate him with the text that appears at the beginning: "Human beings are mostly grey, but in some cases, they are just black." Surely this paavam man can only be one colour: white. But this delicious dark comedy is built on the premise that what we see is not what we get. Deep inside, Mukundan is as poisonous as the cobra that enters his home. (This event results in a terrific payoff.) Vineeth Sreenivasan keeps his expressions small-sized, and it's only through the mind voice can we tell what he's really thinking. The tone of this mind voice is deadpan, almost expressionless. Mukundan's reaction to even the worst tragedy is recited with near-zero emotion. In other words, the director doesn’t hammer us on the head, saying, “Look, look, this is a comedy.” The scene where Mukundan hands over his wedding invitation to another lawyer is a scream. It speaks of his nastiness, his constant desire for one-upmanship, and his personal pride at his "achievement". And all this is done with such understatement.

And that is why the film is so pristinely and so exquisitely funny. Let me warn you first: Mukundan Unni Associates is not a movie for those who like moral science lessons. It's for those who understand that phrases like "karma is a bitch" are more for feel-good motivational books, and to succeed, you have to (more often than not) take the crooked path. It's such a relief to find such an unadulterated celebration of a pure sociopath, who begins to make money by representing hospital patients in fake insurance-claim cases. It's not just Mukundan Unni – the cops, the court, everything and everyone is corrupt. The script by the director and Vimal Gopalakrishnan moves slowly but surely, meticulously charting Mukundan's ascent as though charting the journey of a henchman to a Mafia don. Whether it's that cobra or a touch involving an airbag in a car, every little detail pays off.

Suraj Venjaramoodu as a senior lawyer is brilliant. He looks at Mukundan as though looking at a cockroach he's accidentally stepped on. Like everyone in the film, he embodies the screenplay's motto: It is better to die than fail. Even the patients are on to these get-rich-quick schemes, and one of the most hilarious scenes has a woman shifting her spouse – in an instant – from an unremarkable hospital room to an air-conditioned VIP suite. Everyone wants to milk money out of other people's misery, and yet, their faces hardly seem "evil". These are the most ordinary folks. The only major complaint I had is that the film takes a tad too long to set Mukundan on his path. A smaller complaint is that the unvarying tone results in occasional bouts of been-there-done-that. Otherwise, Mukundan Unni Associates is a wonderful antidote to the well-intentioned message movies that plague our cinema halls. Being bad is such fun.