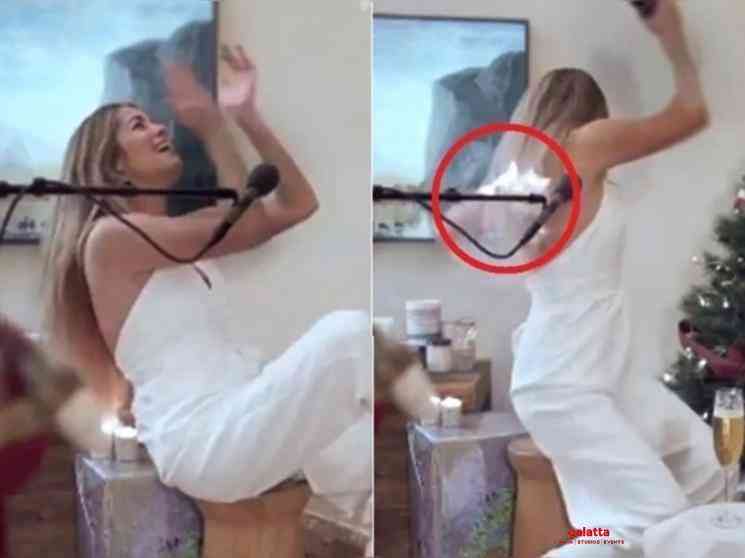 Popular Anglo-Spanish singer and songwriter Sofia Ellar faced an unexpected shock when her recent live online performance with her boyfriend Alvaro Soler went awry. The 27-year-old British-born Sofia's hair caught fire, while she was singing a Christmas carol with Alvaro, with the video of the live performance shared by the singer on her social media page. Dressed in a white jumpsuit, the singer is seen singing 'Feliz Navidad', with a Christmas tree behind them and two lit candles placed behind her.

The Spanish musical couple have given many performances on their social media pages during the pandemic, with the latest live outing not turning out to be as they would have expected. We see in the video Ellar's long hair catching fire upon coming in contact with one of the lit candles as she leans back, with Alvaro taking note and immediately trying to douse it out. Ellar turns around, with the fire eventually being put out. Posting the clip of the incident from the performance on Instagram, Ellar wrote, "2019, we were good. 2020, we light fires and drop glasses. Hello 2021." The video since being posted has received more than 6 lakh views and thousands of comments.

Sofia Ellar began performing at an early age in various small singing concerts in the early 2000s after she moved to Madrid, Spain. She has drawn appreciation from many for her rapport with her fans, especially at her concerts. Having released two albums, Seis peniques (2017) and Nota en Do (2018), Ellar has lent vocals in the computer-animated comedy film, The Angry Birds Movie 2, based on Rovio Entertainment's Angry Birds video game series. She has also sung in the Spanish film, Si yo fuera rico, which came out last year. Watch below the video of Sofia's hair catching fire shared by the singer on her Instagram page: