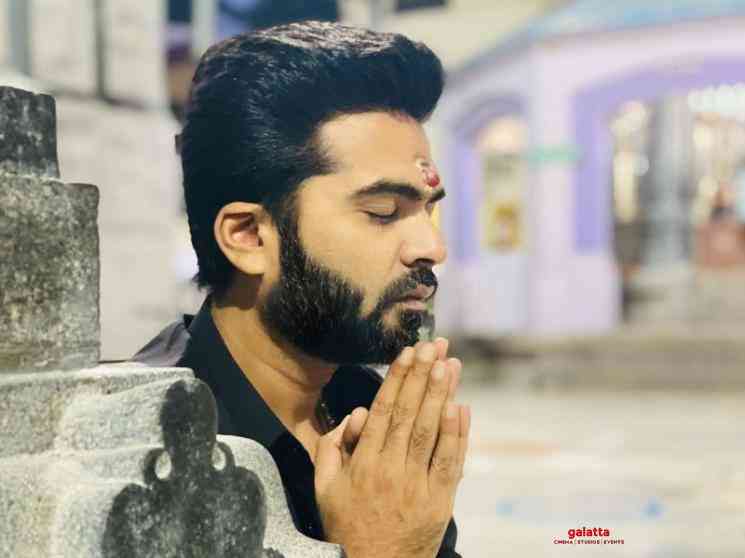 Silambarasan TR has been extremely active over the past few months since his comeback to social media, while also wrapping up the shooting of his upcoming film Eeswaran in a span of less than 45 days. Announced to hit theatres as a Pongal release in January 2021, Simbu's upcoming i, billed to be a rural action family entertainer directed by Susienthiran under KV Durai & MDM Sharfudden’s D Company banner had its Tamil Nadu and overseas theatrical rights bagged by 7G Films and AP International respectively recently.

Post the completion of Eeswaran, STR resumed filming for his Maanaadu under Venkat Prabhu's direction last month, with the flamboyant star now sharing a new picture of himself in preparation for his journey to Sabarimala. According to reports, it is being stated that Simbu will resume shooting for the next schedule of Maanaadu from the first week of January once he returns from his dharisasanam at Sabarimala. This latest picture of Silambarasan TR has stormed social media, with fans wishing him the best for his spiritual journey. It is to be noted that this is the second consecutive year the Chekka Chivantha Vaanam actor is on a pilgrimage to Sabarimala after his last visit in December 2019. Check out STR's latest picture below:

Maanaadu marks the first full-fledged project STR and Venkat Prabhu collaborating after the actor appeared in a cameo in the director's hit 2010 comedy film Goa. The upcoming film is billed to be a mass masala political entertainer and is a multi-starrer being produced under Suresh Kamatchi's V House Productions, with music by Simbu and Venkat Prabhu's long-time collaborator Yuvan Shankar Raja. Maanaadu's star cast also includes names like Kalyani Priyadarshan playing the female lead, followed by SJ Suryah, Karunakaran, Premgi Amaren, Manoj Bharathiraja, Daniel Annie Pope, Y. Gee. Mahendra and veteran directors SA Chandrasekhar and Bharathiraja in pivotal roles. Furthermore, Chennai 600028 II Innings actress Anjena Kriti is a part of the film and had shot a song with Silambarasan before the lockdown brought the production to a halt earlier this year. Some of the notable technical talents in the film's crew include Richard M. Nathan for the cinematography, Praveen K. L. for the editing, Rajeevan for the production design, action choreography by 'Stunt' Silva and costume designs by Vasuki Bhaskar.