Rashmika shares excerpts from her diary about shooting with Vijay for Thalapathy 66 - Check out!

Actor Vijay's Thalapathy 66 is currently in its second schedule in Hyderabad and progressing at a brisk pace. Being directed by Vamshi Paidipally under Dil Raju's Sri Venkateswara Creations banner, the upcoming film is said to be a family-centric story along the lines of the Tamil superstar's Poove Unakkaga and Thulladha Manamum Thullum and has national sensation Rashmika Mandanna cast as the female lead. Announced to open in cinemas worldwide as a grand Pongal 2023 release, Rashmika has now shared her experiences of shooting Thalapathy 66 alongside Vijay on her Instagram Story, with her statement receiving huge feedback from fans.

Posting a picture of herself blushing, Rashmika wrote,

*got ready- headed to It feels soooooo good.. shoot.

It feels soooooo good.. spending so much time with them.. happy happy me.. so grateful

*shoot went well.. and by 4/5pm I passed out on one of the chairs on set... well loves when I say I literally can sleep anywhere I ain't joking... I actually have that gift..

*hit the gym.. with @kuldepsethi after awhile.

*now back home.. tucked in and ready to go to bed!

What a lovely day I had!"

Check out below Rashmika's Insta Story: 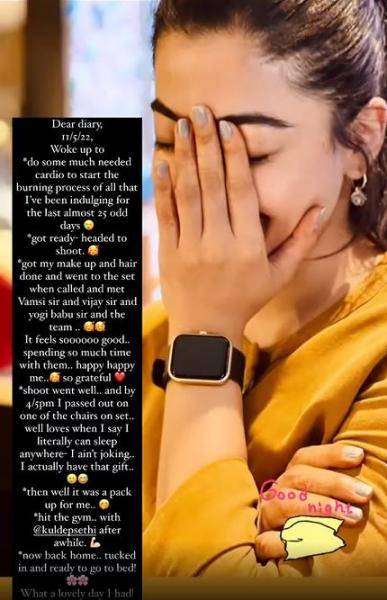 One of the biggest Tamil films in production now, Thalapathy 66 has a massive ensemble star cast apart from Vijay and Rashmika featuring the likes of actors Sarathkumar, Prabhu, followed by National Award winner Prakash Raj, actress-politician Jayasudha, comedian Yogi Babu, Shaam, actress Sangeetha Krish, and Bigg Boss 4 fame Samyuktha Shanmughanathan. Thaman. S is the music director and is the first time the chart-buster composer is working on a Vijay film, while the remainder of the technical team includes cinematographer Karthick Palani, editor Praveen KL, while the dialogues and additional screenplay are written by Vivek, and costume design is by Deepali Noor.

Thalapathy 66 producer Dil Raju's big announcement on his next big film - Check out!

Big surprise for all Spider-Man fans - NEW VIDEO OUT - watch it here!!

Super fun Jalabulajangu Video Song from Sivakarthikeyan's DON - you do not want to miss out this!