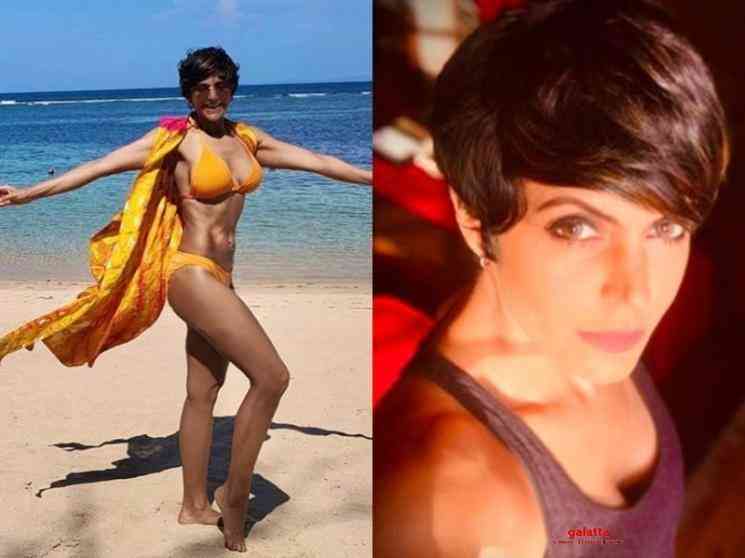 Popular actress and television presenter Mandira Bedi is known mostly among Tamil cinema fans for making a cameo appearance in the Silambarasan TR 2004 blockbuster Manmadhan in which she appears in a cameo at the beginning of the film as a psychiatrist in the "Oh Mahire" song. She became a sensation across the country, especially during the 2003 and 2007 Cricket World Cups, in which she served as the host. An active celebrity on social media, Mandira often treats fans with pictures and videos from her various travels and has now posted a throwback picture from her vacation in the Maldives earlier this year.

In the photo, we see a stunning Mandira Bedi posing happily in a yellow bikini set on the beach, which she has paired off along with a shrug. Mandira, who posted the picture on her Instagram, penned the caption as follows: "As the temperature drops.. major missing happening of the sun sea and sand.. My phone reminded me that this photograph hasn’t been posted, used or even seen the light of day!" Celebrating the birthday of her close friend and actress Mouni Roy in Maldives in September, Mandira had earlier posted a video of their time together, including a few other pictures of herself in a red bikini, while also sipping on a glass of champagne in a neon green body-fitting swimsuit. Check out Mandira's pictures below:

On the work front, Mandira Bedi, who made her film debut in the 1995 nationwide mega blockbuster Dilwale Dulhania Le Jayenge, has since been seen on TV shows like Shanti, Kyunki Saas Bhi Kabhi Bahu Thi and Aurat. She also played a pivotal role in Prabhas' smash hit 2019 multi-lingual action film Saaho and is set to be seen again in Tamil in the yet-to-be-released Adangathey, which also includes G. V. Prakash Kumar, Surbhi, Sarath Kumar and Yogi Babu in starring roles. She is also a fashion enthusiast and debuted as a designer with her saree collection during Lakme Fashion Week 2014.