Fahadh Faasil makes a big announcement on his next film after the success of Vikram! Check Out!

Fahadh Faasil who is currently riding high on the phenomenal success of Vikram, has officially announced the release plans of his next movie and here are the details about it. Fahadh Faasil has multiple interesting projects in his pipeline and one among them happens to be Pachuvum Athbhutha Vilakkum. Earlier this evening (July 7), Fahadh Faasil took to his official Facebook page to share a new poster from the film and the poster carries the release plans. The film has been scheduled to release in theatres in December 2022 and it is most likely that the film will be out during the Christmas weekend.

Interestingly, this will be Fahadh Faasil's first ever Malayalam film to release in theatres. The film is directed by Akhil Sathyan, son of veteran Malayalam director Sathyan Anthikad who has made several critically acclaimed blockbusters. Pachuvum Athbhutha Vilakkum marks the directorial debut of Akhil Sathyan. Produced by Sethu Mannarkkad under the banner of Full Moon Cinemas, the film will have music composed by Justin Prabhakaran, while the cinematography and production design departments are taken care of by Sharan Velayudhan and Rajeevan respectively.

Pachuvum Athbhutha Vilakkum will have three female leads - Anjana Jayaprakash of Queen web series fame, Viji Venkatesh, and Dwani Rajesh. The film will feature Fahadh Faasil playing the role of a middle class Malayali who is settled in Mumbai. According to reports, this will be a travel-based film. Fahadh is currently busy shooting for Udhayanidhi Stalins Maamannan in which he plays a crucial role. Maamannan will be Fahadh's fourth Tamil film after Velaikkaran, Super Deluxe, and Vikram.

Apart from Maamannan, Fahadh also has multiple other projects in his pipeline including Malayankunju which is speculated to have a direct OTT release and an official word regarding the same is awaited. Malayankunju is a survival thriller directed by Sajimon Prabhakar. 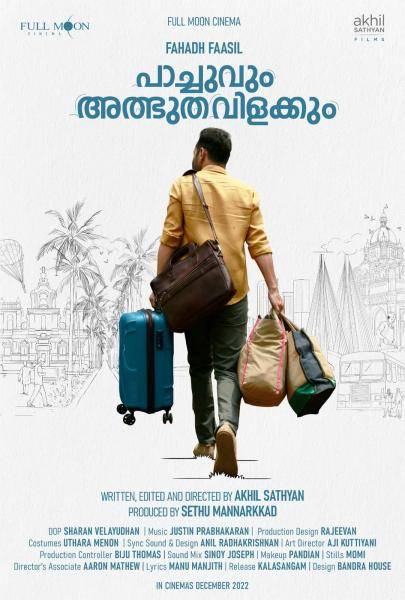 Vikram director Lokesh Kanagaraj reveals the film he wants to make in future! Check it out!

SHOCKING: Theatre screen catches fire during Vikram screening - you will not believe this!!

Vikram Vedha directors are back with a bang! Catch the intriguing trailer of their next in Tamil!

Minnal Murali makers announce their next big project - teams up with KGF sensation!

These two legendary stars come forward to do it for Ponniyin Selvan!!

Amy Jackson makes her first ever public appearance with her boyfriend, as a couple - Check Out!