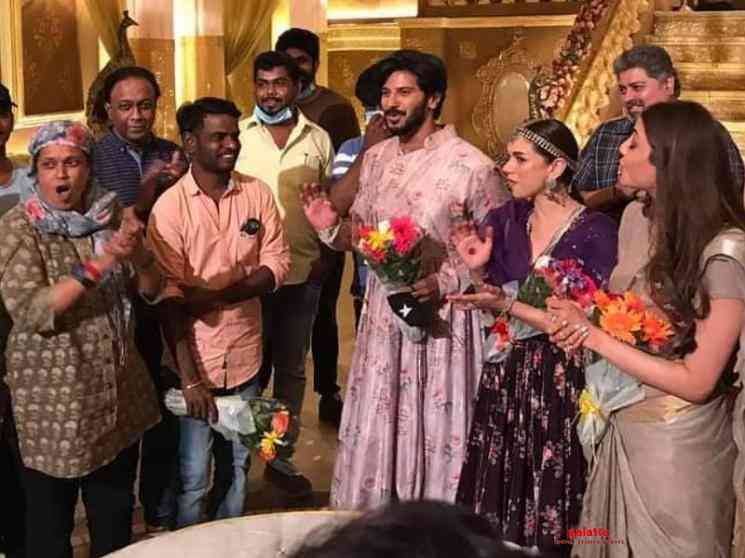 Filmmaking has enchanted many around the world and in Tamil cinema as well as there have been many names in entertainment who stepped into direction after starting out in other streams in the industry. Likewise, there have been choreographers namely Prabhu Deva and Raghava Lawrence, who most notably who took up film direction at a certain point in their careers, and are now big names, with popular dance choreographer Brinda Gopal too all set to make her mark in filmmaking with her debut directorial Hey Sinamika, starring leading Malayalam actor Dulquer Salmaan alongside Kajal Aggarwal and Aditi Rao Hydari. That said, Hey Sinamika being produced by Jio Studios, which is also their debut production venture in Kollywood, wrapped up its shooting on Saturday (December 26).

Taking to their social media pages, Jio Studios informed fans writing, "And it’s a wrap! Happy to announce the shoot completion of our first Tamil film #HeySinamaka starring @dulQuer @aditiraohydari @MsKajalAggarwal . Directed by ace choreographer-turned-director @brindagopal , the romcom completed shoot on Dec 26. @globalonestudio @JioCinema". Being produced in association with Global One, Hey Sinamika went on floors earlier this year in March, but came to a halt due to the coronavirus pandemic and resumed production after a 7-month-long break in November.

The title of Hey Sinamika is incidentally inspired from the song 'Aye Sinamika' from Mani Ratnam's 2015 smash hit film, Oh Kaadhal Kanmani, which as well had Dulquer Salmaan playing the lead hero. The upcoming rom com also includes 96 composer Govind Vasantha for the music, with Preetha Jayaraman handling the cinematography. With Hey Sinamika's shoot now over, choreographer-turned-director Brinda will be looking to complete the post-production works in quick time, with a release plan yet to be announced by Jio Studios.

All three stars of Hey Sinamika are busy names as each of them are currently attached to a number of projects starting with Dulquer Salmaan, who last seen in the superhit Kannum Kannum Kollaiyadithaal, is set to treat fans next to the highly-anticipated period gangster film titled Kurup, which is said to be revolving around Kerala’s most wanted criminal Sukumara Kurup. Likewise, Kajal Aggarwal is currently a part of the biggie, Indian 2, starring Kamal Haasan being directed by Shankar under the Lyca Productions banner. The actress also awaits the release of her Paris Paris, which is an official remake of the Kangana Ranaut-starrer Queen. Kajal will also be seen in Acharya opposite 'Megastar' Chiranjeevi and Mosagallu with Vishnu Manchu in Telugu, including the long-awaited Hindi action crime venture, Mumbai Saga, alongside John Abraham, Emraan Hashmi, Suniel Shetty and others. On the other hand, Aditi Rao Hydari will be seen in Parineeti Chopra's The Girl on the Train in Hindi and Maha Samudram in Telugu, which also includes Sharwanand and Siddharth as the leads.