Two-time National Award-winning actor Dhanush is a busy man as he has a number of high-profile projects lined up ahead among which include Maaran under Dhuruvangal Pathinaaru and Mafia fame Karthick Naren's direction, followed by Sun Pictures' Thiruchitrambalam, the Bollywood film Atrangi Re with Akshay Kumar and Sara Ali Khan and, the Netflix venture The Gray Man alongside Hollywood superstars Ryan Gosling and Chris Evans. The first of these in-development films, Maaran, a Sathya Jyothi Films production venture, has entered the final schedule on Thursday, with director Karthick Naren on Wednesday evening taking to his Instagram to inform fans regarding the latest shooting plans. 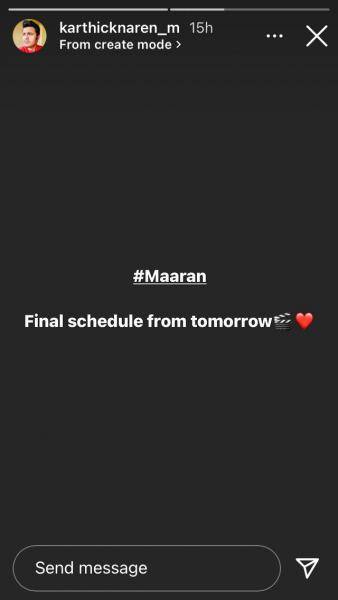 Maaran, which was initially tentatively titled D43, is one of the most-anticipated films among Dhanush fans after the first look poster featuring the superstar holding a pen and pushing another person's head down on the glass table received a stellar feedback. The upcoming film is touted to be an investigative action thriller, with Dhanush paired opposite Master heroine Malavika Mohanan, and the duo playing the roles of journalists. The film's supporting cast features names like Samuthirakani, Smruthi Venkat, Soorarai Pottru fame Krishnakumar and Master Mahendran, who is reportedly playing a character with negative shades. Maaran is the third venture for Dhanush with the prestigious production house Sathya Jyothi Films after the two collaborated previously for Thodari (2016) and Pattas (2020).

Dhanush's Maaran has music composed by G. V. Prakash Kumar, who earlier delivered chart-busters for the actor in films like Polladhavan, Aadukalam, Mayakkam Enna, and Asuran. The film's screenplay has been written by the acclaimed writer duo of Sharfu-Suhas, with lyricist Vivek also turning screenwriter and dialogue writer, followed by cinematographer Vivekanand Santhosham, editor Prasanna GK and art director A Amaran forming the core technical team.