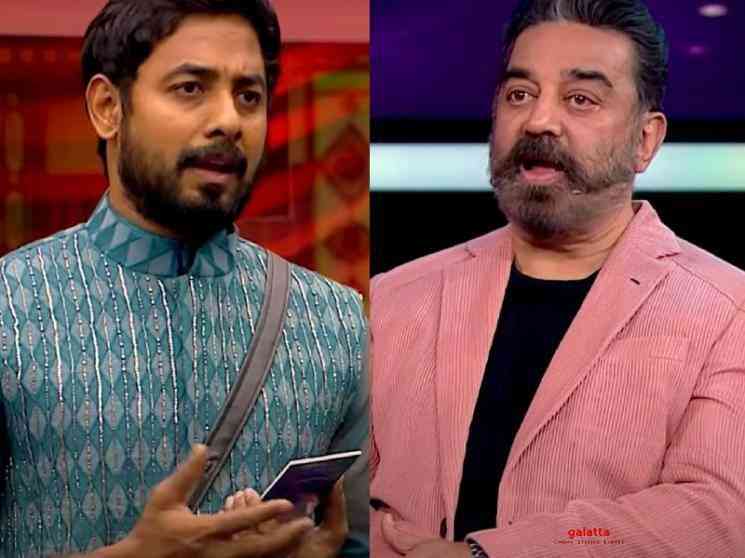 The fourth season of Bigg Boss Tamil is nearing its end and we will be witnessing the grand finale in another two weeks of time. In today's (January 3) earlier released promo, we saw Balaji getting emotional and realizing his mistake during his argument with Aari. Balaji apologized for his actions and confessed that this type of livelihood is very new to him. Kamal Haasan also appreciated Balaji for confessing and realizing his mistake and the promo garnered good attention. However, we will have to wait for a few more days to know how Balaji's actions are received by the audience. Vijay TV has now released the second promo for tonight's episode and in this promo, we see we see each contestant talk about another contestant in the house.

It looks like the eight housemates have been given a task to pick a card that will have the picture of another contestant. Som Shekar gets Aajeedh's card and he tells that he is not even sure if Aajeedh has a strategy to approach the game in further days. The point seems quite believable as we have also not seen any interesting strategies from the young talent in the past 90 days. Aari gets Ramya's card and while asked to talk about Ramya's strategy, Aari goes back to the 'Caller Task' and narrates an incident. However, the show's host Kamal Haasan stops Aari there and tells him that the topic is going elsewhere and asks him to stick to talking about Ramya's strategy.

After hearing Kamal Haasan's response to Aari's speech, Ramya is seen smiling. Towards the end of the promo, Balaji is seen with Aari's card and there cannot be anything more interesting than this, as we know about the incidents that happened between the two in the recent past. We will have to watch the full episode to know what Balaji had to say about Aari. Meanwhile, tonight's episode will also reveal the results of this week's eviction. Five of them were nominated this week - Aajeedh, Gabriella, Ramya Pandian, Shivani Narayanan, and Som Shekar. Gabriella was saved in last night's episode and the remaining four are currently in the danger zone.

It is said that Aajeedh has been evicted from the house and we will get the official confirmation through the episode. For now, check out the newly released promo of Bigg Boss 4 Tamil here: