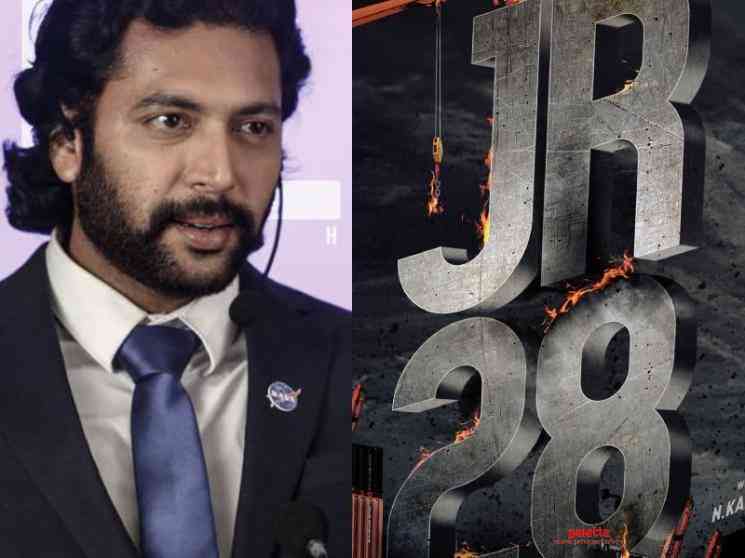 Jayam Ravi will be teaming up with director Kalyanakrishnan of Bhoologam fame for a new film and the official announcement regarding the project was made on the New Year. This untitled film will be Ravi's 28th film and it is tentatively called JR 28. Screen Scene Media Entertainment will bankroll this project which is expected to go on floors, later this year. An official statement from Screen Scene read, “As we celebrate new beginnings, @Screensceneoffl is proud to announce the first step with the very talented genre - bending Star actor @actor_jayamravi with #JR28 directed by Kalyanakrishnan. More updates to follow soon”.

This announcement has made the fans excited and look forward to the film since director Kalyanakrishnan showed immense promise with his debut directorial, Bhoologam that had a strong writing. The announcement was made through a newly designed poster in which we see some interesting elements of a harbour port and it looks like the film's premise is set around that place. JR 28 will be an action entertainer and further details regarding the rest of the cast and crew are awaited.

Last year, Galatta Media had reported that Ravi signed a three-film deal with Screen Scene Media Entertainment and the first project in that deal is now officially announced. Two more films are yet to be locked in this deal.

Up next, Jayam Ravi will be seen in Bhoomi which is his 25th film, as an actor. The film is scheduled to have a direct digital release on Disney + Hotstar OTT platform on January 14 for the festive occasion of Pongal. Produced by Sujataa Vijayakumar’s Home Movie Makers and directed by Lakshman of Bogan and Romeo Juliet fame, Bhoomi has music scored by D Imman. The film has cinematography by Dudley, and editing by Ruben. Bhoomi features Nidhhi Agerwal as the female lead and notably it is her debut in Tamil cinema. The star cast also includes Saranya Ponvannan, Ronit Roy, Radha Ravi, Sathish, and others. Bhoomi will be Disney + Hotstar’s next direct OTT release after Mookuthi Amman and let us hope that the film strikes a chord with the audience.

Ravi is also a part of ace filmmaker Mani Ratnam’s dream project, Ponniyin Selvan in which he is said to play the titular character. Ravi is also working in director Ahmed’s (Endrendrum Punnagai fame) Jana Gana Mana, co-starring Taapsee. For now, check out the official announcement of JR 28 here: