It was earlier reported actor Vishal’s production house VFF company's manager Hari had filed a police complaint against a woman named Ramya, who worked as an accountant for Vishal Film Factory for the past six years. In his petition, Hari had claimed that the woman has swindled around Rs 45 lakhs from Vishal’s company for the past six years. In the complaint, it is claimed that Ramya had misused Vishal’s funds and transferred money to her account and accounts of her relatives. Manager Hari has also reportedly accused Ramya of buying a new house recently with that money. This action from Vishal Film Factory comes after Hari found discrepancies in the company’s expenditure. The complaint has been registered and the Police have begun their investigation process.

Now Vishal’s production house has issued a general notice to the public to not get involved with Ramya in any way. The notice reads as follows - “This is to inform the general public that Mrs. Ramya, who was working as a chief accountant in our company "Vishal Film Factory", for the past several years has been found misappropriating funds to the tune of Rs.45,00,000 through the company's bank accounts.   A Police Complaint was lodged and an FIR has been registered against her and others under relevant sections by the Virugambakam Police on 7-7-2020 and is under investigation. It is therefore advised that anyone dealing with Mrs. Ramya henceforth will be doing so at your own risk and she is not connected to "Vishal Film Factory" anymore. It is made clear that VFF will not be responsible anymore for any dealings with Mrs. Ramya - VISHAL FILM FACTORY

Earlier Ramya in her defense claimed that she was not at fault and blamed Vishal for cornering her to cover up a big scam. Ramya in her statement to a media last week said - “If Vishal had asked me in person about this issue, I would have cleared his problem. All Vishal’s individual expenses happen at a spur of a moment, they are all very impromptu expenses. Vishal would call me in the night around 12 and ask me for funds. At that point, I might have to transfer the fund to a different account due to logistical reasons. Take for example his Electricity bill, Telephone bill, or any other personal expenses, we pay all these expenses through our personal account since the company doesn't have the net banking facility. So, we transfer money to our account and make payment for his expenses, this practice was used by people who worked in my position before and I followed them. So, we spend money from our account and claim that amount after 1 week after getting his proper approval. Taking all these data, he has now filed a complaint against me saying I have looted money from him.” 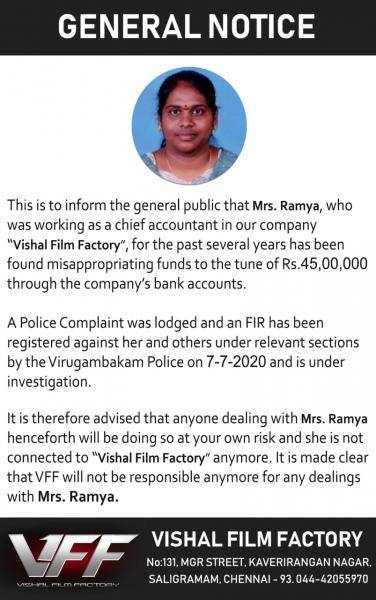