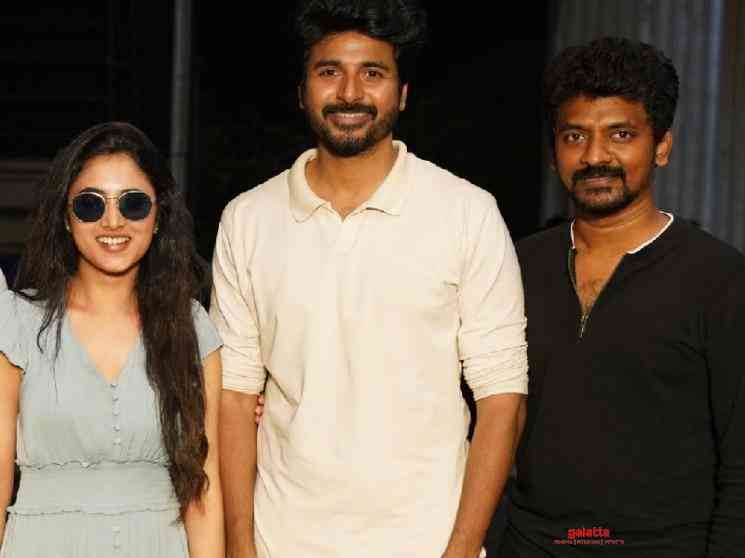 The entire shooting of Sivakarthikeyan's Doctor has been wrapped up and the film will enter the post production stage now. The shoot wrap up was celebrated by the team with a special cake cutting ceremony. Sharing his happiness about wrapping up the film’s shoot, director Nelson tweeted, “Wrapped up #doctor it was a memorable one with lots of fun and love in the sets, spl thanks to my thambi @Siva_Kartikeyan for making this possible, hilarious days”. The video song of the viral hit number, 'Chellamma' was shot in this last leg of shooting. Popular dance choreographer Jani Master who is known for choreographing (along with Prabhu Deva) 'Rowdy Baby', has choreographed the dance moves for 'Chellamma'.

We can expect the visuals of Chellamma song to become a sensational hit on social media. Doctor will be Sivakarthikeyan's next release after PS Mithran's Hero and the fans are eagerly waiting to see the film. Doctor is directed by Nelson Dilipkumar of Kolamaavu Kokila fame and produced by Sivakarthikeyan Productions in association with KJR Studios. The film has music scored by Anirudh Ravichander and without a doubt, his work is going to play a key role. Doctor features Gang Leader fame Priyanka Arul Mohan as the female lead and Vinay in a grey shaded character. Yogi Babu, Bigg Boss fame Archana, Dheepa, Arun Alexander, Zaara Vineet, and Redin Kingsley will be seen in important roles.

The film's cinematography is handled by Vijay Kartik Kannan and editing is taken care of by R Nirmal. Bigg Boss 3 sensation Kavin is also a part of this comedy entertainer and he has worked in this film as an assistant director. Going by the current scenario, Doctor is expected to release in the theatres during the summer holidays. Doctor's director, Nelson will next be directing Thalapathy Vijay's untitled next (Thalapathy 65) and there are phenomenal expectations around that film.

Thalapathy 65 will be bankrolled by Kalanithi Maran's Sun Pictures. The film will have music composed by Anirudh. The title announcement teaser which released last month, created a huge buzz on social media and the fans are looking forward to seeing the film. The shooting of Thalapathy 65 is rumoured to begin from March 2021 and Nelson will be planning to hand over the final copy of Doctor before that. For now, check out the latest official update about Sivakarthikeyan's Doctor here: