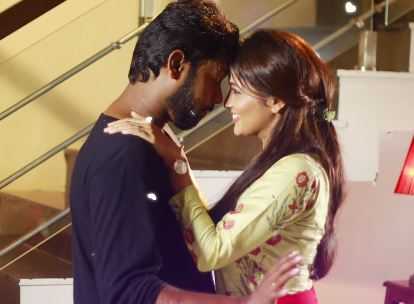 After the success of Kanaa, Sivakarthikeyan is back with the second production venture titled Nenjamundu Nermaiyundu Odu Raja. The comedy-drama film is written and directed by debutant Karthik Venugopalan. NNOR also marks the debut of the popular VJ Rio Raj as a lead actor. Shirin Kanchwala in playing the lady lead while RJ Vigneshkanth, Nanjil Sampath and Radha Ravi play supportive roles in the film. Shabir is composing the music for the film.

The trailer launch of the movie happened a few days back with the whole team decorating the event. The trailer of NNOR was made in an interesting way promising a fun entertainer and the movie is set for a grand release on June 14th. And now, the team has released the lyric video of the song titled Muttathey Muttathey. Composed by Shabir, the song is sung by KG Ranjith and Janani Vengat. Lyrics for the song is done by Kiran Varthan.

Check out the video song here,