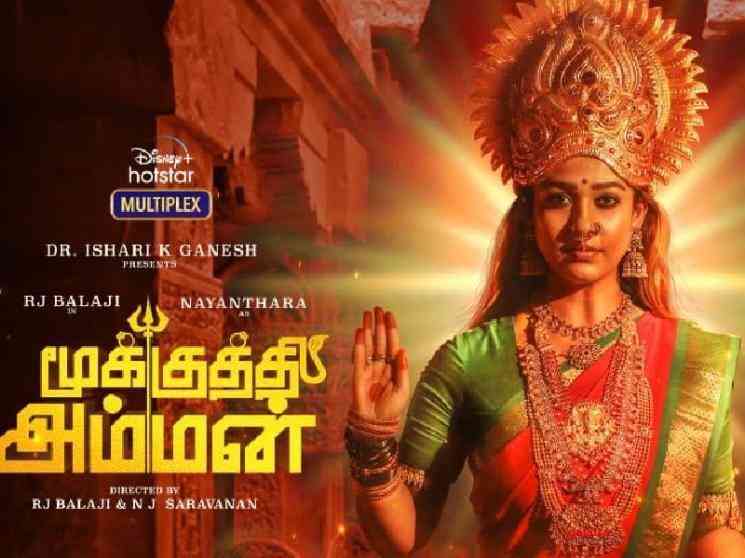 RJ Balaji's debut directorial, Mookuthi Amman, is gearing up for its direct digital release on Disney + Hotstar OTT platform on November 14, marking the festive occasion of Diwali. The film has got huge expectations among the fans and it is touted to be a fun-filled entertainer with an important message. Produced by Isari K Ganesh under the banner of Vels Film International, Mookuthi Amman is directed by RJ Balaji and NJ Saravanan. Lady Superstar Nayanthara plays the titular role and her makeover as a Goddess has received a very good response from the audience. The film's trailer was released last week and it opened to an overwhelming reception.

The trailer struck a chord with the audience and it has made everyone look forward to the film. RJ Balaji is someone who understands the pulse of the audience and reflects it through his movies and commentary (IPL) and it looks like Mookuthi Amman is no exception. Looking at the trailer, it looks like the film will take a dig at the fake godmen who cheat the people of the country in the name of god and religion. While Nayanthara will be seen in the lead role, the film also features RJ Balaji, Urvashi, Ajay Ghosh, TSBK Mouli, Smruthi Venkat, Indhuja and others. On the technical side, Mookuthi Amman is backed up by Dinesh Krishnan's cinematography and RK Selva's editing.

With just 2 more weeks away from release, the makers have now started their promotions in full swing. The first single song from the film will be released tomorrow (November 2) and the exciting part is that it will be a video song and not a lyric video. We would be witnessing a new video song from Mookuthi Amman and it has excited the fans. This single song is called 'Aadi Kuththu' and it is composed by Girishh Gopalakrishnan of Aval fame. The song is written by lyricist Pa Vijay. Going by the name of the song, it looks like the first single will be an energetic dance number. Think Music has acquired the music rights of the film and the video song will be released on their official YouTube channel.

This year's Diwali is definitely going to be interesting for a lot of people as new movie releases are directly going to come to their homes. As Nayanthara's Mookuthi Amman is scheduled to release on November 14 for Diwali, gear up to witness the Aadi Kuththu video song from tomorrow. Check out the announcement poster below: