Navarasa is director Mani Ratnam's next production venture and it is an anthology comprising of nine stories. Each story will be a visual representation of each rasa and the fans are highly excited about the project. The anthology will bring together 9 highly talented filmmakers and several notable stars are a part of the project. Navarasa is a project that has excited the fans ever since its announcement because of its fresh collaborations and the anthology is expected to release in the second quarter of this year. Navarasa will release on the leading OTT streaming platform, Netflix.

The entire revenue and financial returns of Navarasa will be donated to the FEFSI union workers who were badly hit by the Nationwide lockdown during the initial months of the pandemic in 2020. One of the 9 short films is directed by the young and promising Karthick Naren of Dhuruvangal Pathinaaru and Mafia fame. Karthick Naren's film features Arvind Swami in the lead role and it is said to be an interesting sci-fi thriller. The short film will depict the Adbutha Rasa (Wonder / Surprise) and let us keep our fingers crossed and see what the young filmmaker has in store for the audience.

In a recent interaction with the fans, Karthick Naren mentioned how Mani Ratnam reacted to his (Karthick's) script after reading it for the first time. Answering the fan's question, Karthick Naren wrote, "He texted, "Read the script karthik. Enjoyed it. Looking forward". As we know, Mani Ratnam is a man of few words, but these words would have been enough for Karthik to get excited and feel happy. Let us now hope to see the film soon.

The other notable filmmakers in Navarasa include Gautham Vasudev Menon, Priyadarshan, Bejoy Nambiar, Rathindran Prasad, Karthik Subbaraj, Arvind Swami (debut directorial), Sarjun, and others. Suriya, Vijay Sethupathi, Arvind Swami, Siddharth, Ashok Selvan, Aishwarya Rajesh, Parvathy Thiruvothu, Azhagam Perumal, Revathy, are some of the actors who are a part of Navarasa. For now, check out Karthick Naren's reply about Mani Ratnam's message to him after reading his script in Navarasa here: 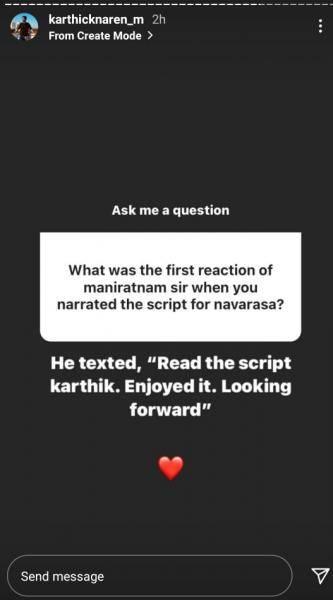