Ali Abbas Zafar's 'Jogi', with Diljit Dosanjh and now on Netflix, is a solid thriller-cum-drama set amidst the 1984 anti-Sikh riots 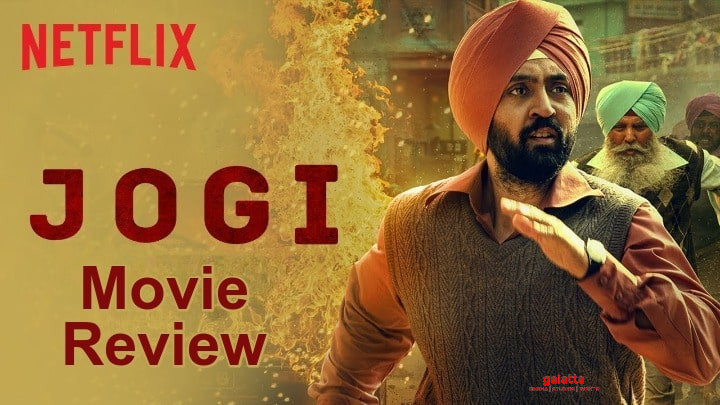 The opening scenes of Ali Abbas Zafar's Jogi, set in 1984, four months after Operation Blue Star, are right out of the Mainstream Screenwriting Textbook. Before you depict tragedy, give us the happy-family scenario. And so we meet Jogi, played by Diljit Dosanjh, and his joint family. They are having parathas for breakfast. The same sequence establishes the close-knit quality of the relationships, the fact that the father is due for retirement, the fact that Jogi's older brother runs a shop, and also the inherent Sikh-ness of the protagonist. The first time we set eyes on Jogi, he is looking into a mirror, perfecting his turban, and he smiles when that perfection is attained. And then, Indira Gandhi is shot dead, and things change forever. We soon see why we needed that shot of Jogi and his turban.

The film follows an Argo-like narrative, where a number of Sikhs have to be rescued from the clutches of not just mobs, but also the police that have let loose those mobs. Kumud Mishra plays a Councillor who thinks he can rise up the ranks by organising a massacre of Sikhs. He justifies himself by quoting Newton: "Every action has an equal and opposite reaction". He assembles a band of bounty hunters and offers a thousand rupees per Sardar killed. Mohammed Zeeshan Ayyub is at the scene. He plays a cop with a conscience, and he is appalled. These scenes, again, are right out of the Mainstream Screenwriting Textbook, with a Muslim and a Hindu determined to help the Sikhs. This whole stretch, which makes up the first thirty-odd minutes, isn't bad, exactly. It's just that there is an easy sentimentality, which doesn't cut very deep. We realise the horror of the situation but we don't feel it.

But after this set-up, the film takes off. We get a fairly tense set piece inside the lion's den, so to speak. Another shot, where the camera enters a kitchen, gives us a jolt. At such times, I wondered how much better Jogi would have been when seen on a big screen. The best scene has Jogi exploding in rage, against the very friend who is helping him. After being strong for so long, he finally feels like a victim, and it is good to see that he is not always in control of his emotions. Diljit is perfectly cast. He may not be able to sell big speeches too well, but the innate innocence he projects on screen is used to wonderful effect. Mohammed Zeeshan Ayyub, on the other hand, doesn't register as strongly. Perhaps it's the fact that the character he plays has no dimensions other than "a very decent human being", and one-note nobility is among the hardest qualities to put across by an actor and also endure by the audience.

The most interesting writing decision occurs when a face-off segues into a flashback. At first, the change of rhythm threw me off, but then we see that this flashback fits perfectly. One, it establishes the motives of the character played by Hiten Tejwani. But more importantly, it shows us that even if you are friends with people from other faiths, that friendship sometimes comes with a boundary-line that must not be crossed. In other words, it wasn't just Indira Gandhi's death that 'othered' the Sikhs. They were already treated as different. And when we return to the present with that knowledge, the film becomes more poignant. Jogi could have been better, more tense, but it's still a solid thriller-cum-drama that does not try to do too much. Instead of covering a large canvas, the screenplay sticks to one group of Sikhs from one locality – and the extrapolation happens in our heads. Ali Abbas Zafar gave us two solid mainstream movies with Gunday and Sultan, before losing his mojo with Tiger Zinda Hai and Bharat. Flaws and all, Jogi is a welcome return to form.

Dhanush aspires for the best

Shivaraja back to his 20's