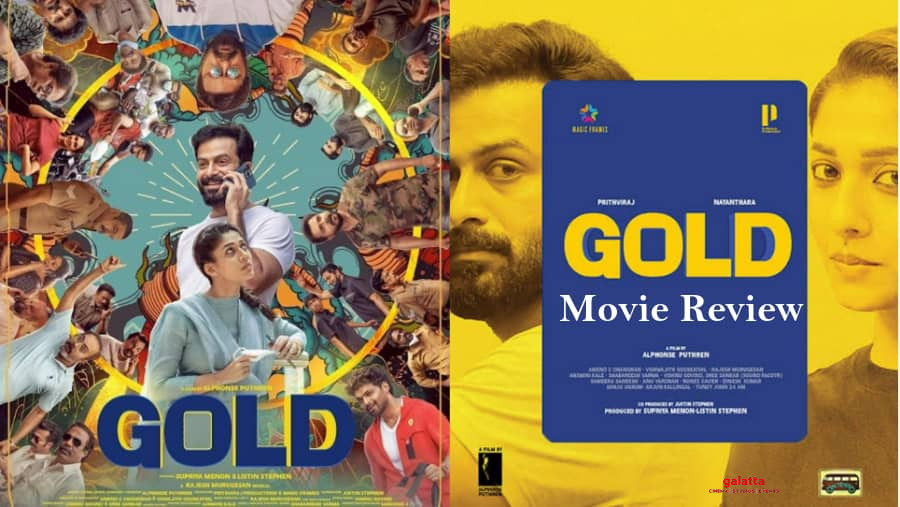 Gold marks Alphonse Puthren's return to the screen after seven years, and to talk about the flavour – or rather the vibe – of the film, let's look at the stretch where a man needs a gold furnace. The easiest thing may be to have the man Google it up, but this is how Alphonse does it. The man calls a jewellery store. No luck. He calls another jewellery store. Again, no luck. Then he calls someone who is about to hang himself. Bingo. He gets it. This entire series of scenes is not about "logic", but about a certain approach the screenplay takes. It rambles with scenes you think can be cut out, but without those scenes the punch with the suicidal man would not work.

The man looking for the furnace is Joshy, and he's played by Prithviraj in a somewhat one-note manner – but that is also because the character is one-note. Like many in the film, he has no shades. Gold takes off when Joshy discovers a truck full of, well, gold, and there's a parallel track where the phone store he owns in a mall is about to slip away from his hands because the owner of the mall has asked him to vacate the premises. Now, this is a classic situation about a desperate man and the easiest route the screenplay could have taken is to first establish the desperation, the need for money, and then have Joshy come across the gold, which could solve all his problems. But Alphonse – thankfully – is not your typical filmmaker (or writer), and he does not link these two pieces of information in a "dramatic" way: that is, in the way a typical cause-and-effect drama would. He keeps them separate. Instead of using the "gold situation" to make us pity Joshy and root for him, he uses it to build a series of obstacles for the man.

Money is the invisible theme of the film, right from the title. It's there in the form of dowry. It's there in the form of an impoverished family that has not eaten for days. It's there in the form of a cop who keeps stealing things that are confiscated at a police station. It's there in the form of a brand-new Volkswagen car. It's probably also there – off-screen – in the number of shooting days, in the time taken to release the film. Like Premam, Gold is filled with a lot of shots and scenes where nothing seems to happen. But in Premam, these "nothing shots" added a fantastic aftertaste to the main narrative. You might have felt that this scene or that one could have been cut out, and maybe we would not have missed them – but because they are there on screen, the film becomes bigger. It becomes more than just the "story".

That does not happen in Gold. The laughs do not land. The oddness of the Saiju Kurup character, the running gag of jumping over a compound wall of a police station, the scene with Vinay Fortt and an army guy, the scenes where Joshy smokes secretly so his mother (played by Mallika Sukumaran) will not find out, or the scene where this mother keeps offering food and drink to people – none of this comes together as a satisfying whole. The film never takes root in the head, and the effort to put together the links is exhausting. Nayanthara is the nominal heroine. Her entire character could be  summed up in three words: "she eats popcorn". I'm exaggerating a little, but that's not too far from the truth. I did laugh at places (like a bit about an "exterior designer"), but the film is too diffuse to put a frame around. I loved the idea of having one-off characters come and go, but they should have been memorable cameos that stick in the mind – and they aren't.

Among the pluses is Rajesh Murugesan's super-fun soundtrack. The truck containing the gold is a Bolero, which is also the name of a form of Western Classical Music – and at one point, we do hear a famous piece of Western Classical Music. (It's "In the Hall of the Mountain King," if I recall correctly.) But the quirky music hints at a movie that should have been much quirkier. Alphonse likes to show grasshoppers and ants and birds and squirrels, but they do not have the impact of the butterfly in Premam. I am not asking for a super-tight plot, but even loose storytelling has to add up in some way. Gold is by no means a lazy failure. But it is one of those films where the concept lies far above the execution, and the nobility in the last stretch comes out of nowhere and kills the amoral mood we have been in that far. By the end, there's no awe – just Au.