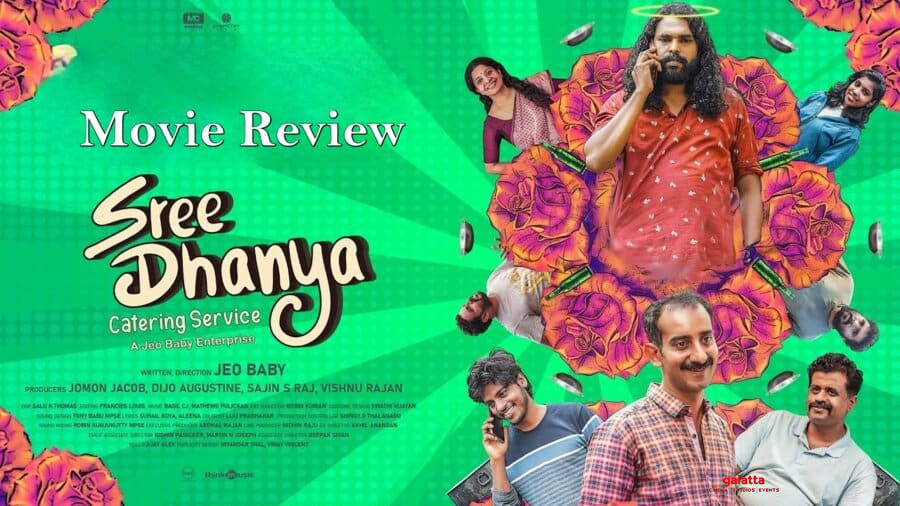 Cast : Prasant Murali, Jeo Baby, Sumesh Moor, Rahul Reghu, Gilu Jospeh, Beena Jeo,
Production : Mankind Cinemas,Symmetry Cinemas
Director : Jeo Baby
Music Director : Mathews Pulickan,Basil C J
Recently, many films have used humour as a vehicle for thorny subjects, but Jeo Baby’s balancing act is possibly the best – he is not inviting us to laugh at these characters, but with them.

Let’s begin with an echo shot. Jeo Baby’s Sree Dhanya Catering Service opens with a few men huffing and puffing and grumbling as they cycle to an uphill destination. Much later, we see two women cycling freely and happily on regular roads. Let’s look at another echo, this time with a couple of events. Early on, a middle-aged housewife has to ask her husband permission to visit her home. Later, we see a much younger woman on a motorbike, going wherever her heart takes her. Somewhere between all this lies what the film is trying to do. Right from his first feature, 2 Penkuttikal, gender has been a part of the stories this director likes to tell. Sree Dhanya Catering Service can be seen as a gender reversal on The Great Indian Kitchen, the movie that put Jeo Baby on the map. There, it was a woman struggling with the business of making food, among other things. Here, it is about a bunch of men struggling to make biriyani to celebrate a child’s birthday.

But that’s just the surface. Unlike The Great Indian Kitchen, which was sharp and focused and made its point emphatically, this is a looser and more free-flowing comment on society. The points are still there, but they are spread out over a series of tangential scenes that capture a series of non-events but come together in your head as a whole. I think this is the better film. It tackles many of the same topics, but it’s lighter. It’s funnier, too. “In real biriyani, the chicken will not be fried,” declares a man. Another question: “Is the Kozhikode style of making biriyani better than the Kottayam style?” As a result, a frustrated cook bursts out, “Has the Indian Constitution specified only one way to make biriyani?” One of the most hilarious cuts is from a scene of great panic over apparently undercooked rice to a scene where a man is blowing up a balloon for the birthday.

Recently, many films have used humour as a vehicle for thorny subjects (Jaya Jaya Jaya Jaya Hey comes to mind), but Jeo Baby’s balancing act is possibly the best – because he is not inviting us to laugh at these characters, but with them. Sree Dhanya Catering Service does not create a distancing device that puts a wall between “us” and the characters on screen. The film is so delicately made (note the brilliant hand-held camerawork by Salu K Thomas, or the shots that begin with shadows on walls, or the montage of sleeping people) that we become one with these people, enacted by Prashant Murali, Jeo Baby, Anna Fathima, and many others. I loved the silent camaraderie between two women, one on a scooter and the other on a bike. I loved the cutaway to a mother left with a wailing child.

And I loved the political diversions, like the local liberal who walks out of an event because he finds it “discriminatory”, and yet steals words and views from his feminist girlfriend and passes them off as his own. The way the concept of communism is conveyed near the end, through the sharing of food, is just terrific. And of course, we have the domestic politics, too. “The household chores never seem to end,” says a woman. The men, meanwhile, keep interrupting their biriyani-preparation with drinking sessions. In other words, this kind of thing is a job for women. It’s drudgery. But for these men, it’s something fun, something optional, something like a hobby. They do it because they choose to, not because they have to. Another thing. These men cook as a group. Their wives, meanwhile, have to do it all alone.

At some points, the film – set during the pandemic – plays like Sanal Kumar Sasidharan’s Ozhivudivasathe Kali, with men and their egos and their constant need for one-upmanship. But the everyday-ness keeps it from going to really dark places. The fact that a man is initially reluctant to send his wife to her home, but later agrees just because he wants an empty house for the biriyani party – that’s the level of darkness here, and that’s enough. While the central, biriyani-preparation track gets an amusing and very apt closure, some threads are left hanging – like what happens to an auto driver’s love, or what happens to the man who wants an online dating profile, or what happens to the local liberal’s girlfriend. But I like to think it’s deliberate. These people are like the cloves and cardamom in the biriyani. They add a dash of extra taste to a very satisfying meal… I mean, movie.