Senna Hegde’s ‘1744 White Alto’, with Sharaf U Dheen, is a kind of stoner comedy where some jokes land big-time while others feel forced 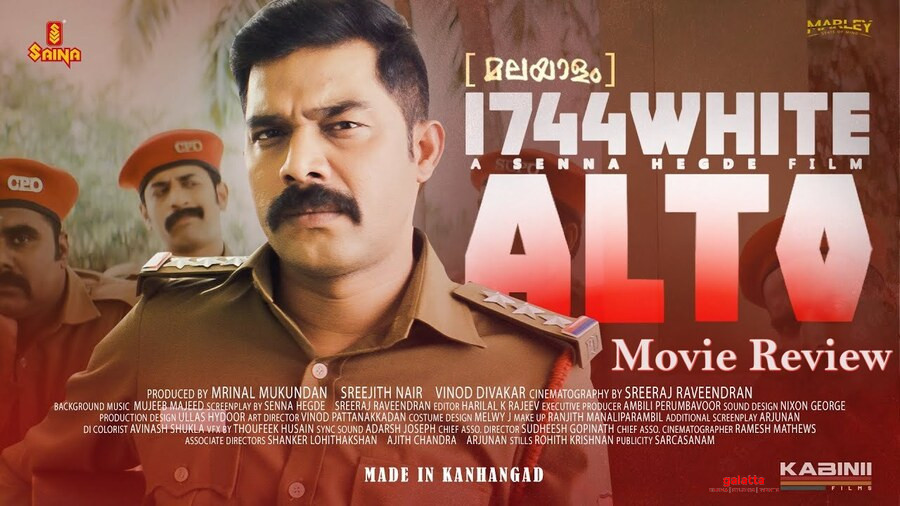 Cast : Sharafudheen, Rajesh Madhavan, Vincy Aloshious, Anand Manmadhan, Navas Vallikkunnu,
Production : Kabinii Films
Director : Senna Hegde
Music Director : Mujeeb Majeed
For everything that works – say, a random bit with a lottery seller – there are things that seem to be trying too hard. I got the sense that the problem was with the pacing.

Senna Hegde began with a feature-length documentary set in Kanhangad, which is where 1744 White Alto is also set. In his first feature, Katheyondu Shuruvagide,  he overcame the generic beats of a rom-com by adding a coming-of-age element. His second feature, Thinkalazhcha Nischayam , a comedy-drama again set in Kanhangad, was an instant masterpiece. It established Senna as someone whose stories – when “told” – may seem very thin, very broad. But scratch the generic  surface, and you’ll find a filmmaker who breaks down these broad stories into a series of moments rather than a series of events. What you remember in Thinkalazhcha Nischayam are little, flavourful things like bitter gourd curry or a woman’s right to visit Sabarimala. The reason for this long preamble is this: If there’s one thing you can say about Senna Hegde, it’s that he’s not a safe filmmaker. You can’t slot him. 1744 White Alto, therefore, is some kind of stoner comedy.

We open with a landscape right out of a Western. It looks like a parched desert, but with patches of shrubs. A car snakes into this visual, and there’s another vehicle – and there’s a transaction about which we do not hear a single word. (The camera is still far away, in a wide shot.) Think about that again. This is the inciting incident. It’s the thing that sets up the film and two of its most important characters. And we do not have a clue about what’s happening. It’s brilliant! As it turns out, this transaction itself is what Alfred Hitchcock used to call a MacGuffin: something you think is the focus of the story, while it actually isn’t. The rest of the film, after this opening stretch (Sreeraj Raveendran is the brilliant cinematographer), revolves around the adventures – or rather, misadventures – of a series of characters, led by a cop wonderfully played by Sharaf U Dheen.

From his three features, there’s another thing evident about Senna. Sharaf U Dheen has been in enough films to show us what a solid performer he is, but Senna pushes him (and every else in the cast) into a zone where every look, every line has a beat or a pause or something just a little bit off. He directs actors wonderfully. In a very funny stretch involving the arrest of a very dumb liquor smuggler, one of the cops has a casual punch line that ends the scene. The way he utters that line, so casually and yet with such a quirky flavour, I burst out laughing. That’s the word that describes the film: “quirky”. Also, “bizarre” – in the sense that, out of nowhere, we get into the zone of a circus, with a couple of these real-life clowns outfitting themselves like actual circus clowns, big round red noses and all. Heck, this is the kind of film where a getaway car has a Rubik’s Cube in the glove compartment.

1744 White Alto is a crime-comedy where the writing has arcs, and isn’t merely a bunch of jokey scenes. An early plot point talks about a new church, and a late plot point revolves around a giant crucifix. A man who objects to being called dumb doesn’t utter a word – in the sense that he may actually be speech-impaired, or dumb in the other sense, too. And we get a running series of gags involving the Sharaf U Dheen character’s domestic life. The bit around his mother’s reaction to a cup of tea made by his wife is another point where I cracked up. But this time, Senna’s timing isn’t always on point. There’s a scene in a seedy hotel, involving the world’s most disinterested receptionist and an implied gay angle. It should have been super-funny, but the pacing is a bit off, and we are stranded with a joke that doesn’t land.

Comedy is the most subjective of genres, so there may be some of you who say, “What’s wrong with you? That scene was so funny! I died laughing!” Sure. As for me, for everything that worked – say, a random bit with a lottery seller – there were things that seemed to be trying too hard. There are amusing political bits about cow vigilantes and love jihad, and just the sight of a man in a “Fly Emirates” T-shirt is super-funny, but a bit woven around the Hollywood film, Home Alone, feels very forced. And time and again, I got the sense that the problem was with the deliberateness of the pacing. Now, pacing has always been a big part of Senna’s films. Way back in Katheyondu Shuruvagide, I wrote in my review: “The pace is deliberate but not slow.” This aspect worked in that film and in Thinkalazhcha Nishchayam, but it isn’t as sure-handed here. 1744 White Alto is a fascinating addition to Senna’s resume, but as a standalone film, I wished it had come together better. Quirkiness works best as flavouring; here it is the main dish. I was left hungry for more.