Prasun Chatterjee's Dostojee is a moving, lyrical drama about a childhood that struggles to transcend communal tensions 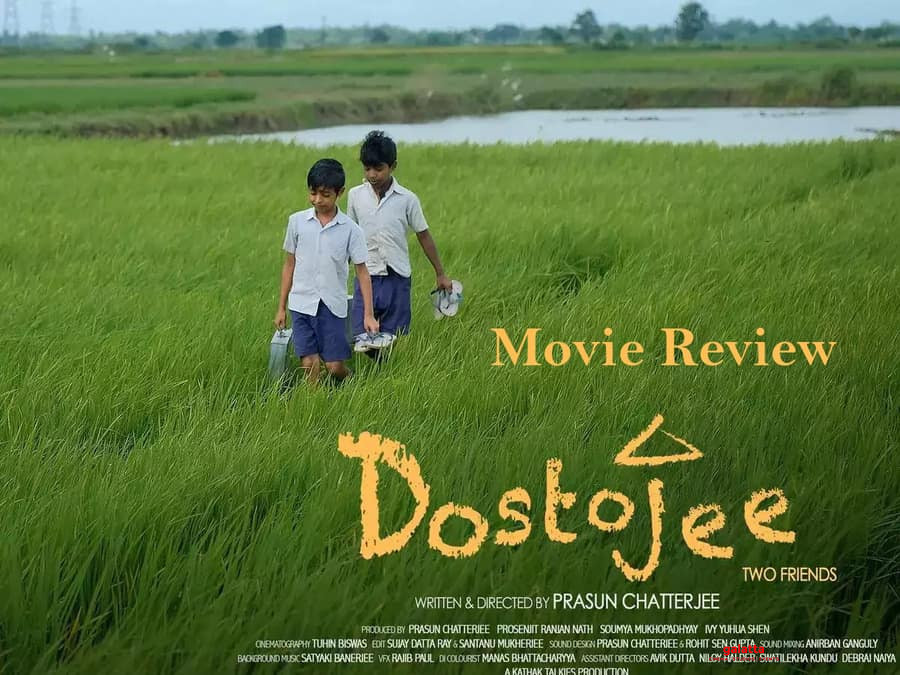 The title of Prasun Chatterjee's Dostojee is an affectionate term for a friend, and the film revolves around Palash and Safikul (Asif Shaikh, Arif Shaikh), who are best friends and neighbours. The first time we see these eight-year-old boys, they are in one of cinematographer Tuhin Biswas's extraordinary wide shots. They are by a river, skimming stones and getting drenched in a downpour. Palash and Safikul are seen in many such frames – and they seem one with Nature, with hardly anyone else around. These children may come from impoverished backgrounds, like many in their village on the border of India and Bangladesh, but they are in paradise, in a wonderful world filled with rivers and giant trees and bird sounds and caterpillars. But when they come home, the real world intrudes. Their houses are separated by a makeshift wall, and the families seem to exist in some kind of uneasy harmony.

This is a few months after the demolition of the Babri Masjid and the Bombay blasts. Palash's father is a Brahmin priest, who is puzzled by the sudden ascent of Lord Ram, who has never been as much of an object of devotion among Bengali Hindus as among the Hindus of North India. Safikul's father is a Muslim weaver. The boys take tuitions together, but while they go back and forth between each other's homes, we don't see the rest of their families talking or socialising. More unrest is on the way. In this Muslim-majority village, there are plans to build a "Chhota Babri Masjid". The Hindus, meanwhile, plan to bring a folk-theatre group to stage the Ramayana. There's a lovely scene where the boys go backstage and see Ram and Raavan having a smoke. The actors tell them that they are only acting as enemies, to earn a living. Otherwise, they are friends.

To the wide-eyed boys, this is a revelation – and to the adults watching Dostonjee, this does not come across like a lecture or a message. The scene gently underlines how communal tensions may force people to "act" a certain way, even if their hearts tell them otherwise. Even the film's timeline is established so casually, through the news heard on a radio. The first headline is about an explosion in Tamil Nadu. The second is about the Babri Masjid enquiry commission. The third is about Dawood Ibrahim. The fourth headline is about stock markets after the Mumbai blasts. The Ayodhya event is no longer the central topic of conversation, but it's still hovering around there, even as other news items have come to the fore.

The refusal to make an "event" out of any occurrence results in one minor issue. At two-odd hours, Dostonjee seems to go on for too long. But then the lyrical, Ray-like feel of the film made me check out the running time of Pather Panchali, which is one of my favourite films and one that I have seen many times, and I found that that's about two hours, too. So perhaps this "issue" I just mentioned is more due to my decreasing attention span than anything to do with the film itself. By concentrating on the boys rather than adults, Dostonjee retains the purity of childhood, at a point where the friendship stays strong even as the outside world begins to rupture. Palash and Safikul do fight – but it's a childrens' fight. Unlike adults, they make up quickly, and the reason for the fight does not fester.

Eventually, we do witness a tragic separation. But this plot point does not come at us the way we think it will. There is absolutely no emotional manipulation, and even the shots with teary-eyed characters are staged with the same simplicity and truthfulness as in the rest of the film. The routines of daily life provide a constant contrast to the changes in the fabric of society – and this "smallness", this emphasis on finding the epic in the intimate, is the film's success. At the end, I wondered how a sequel might be made. As grown-ups, what will the world be like? Dostojee can be seen as a childhood version of Padosi, Shantaram's 1941 drama about a Hindu man and a Muslim man who are best friends and neighbours, unaffected by the communal tensions that have kept rising after the formation of the Muslim League and the divide-and-rule policy of the British. All these decades later, it's crushing to see that so little has changed.