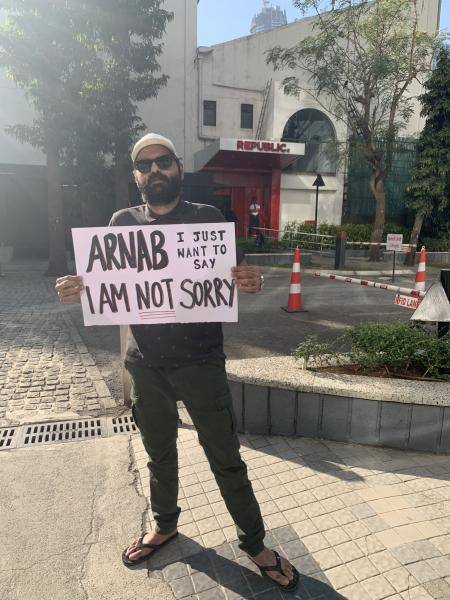 Delhi: Following the incident where stand-up comedian Kunal Kamra recorded himself giving a tongue-lashing to the editor and majority owner of Republic TV, Arnab Goswami, Kamra has uploaded a picture of himself with a placard reading "Arnab, sorry I'm not sorry". Though he was banned by four airlines without enough grounds for such action, the stand-up comedian has apparently decided to keep things light on his side.

@MoCA_GoI @HardeepSPuri In light of the recent incident on board 6E 5317 from Mumbai to Lucknow, we wish to inform that we are suspending Mr. Kunal Kamra from flying with IndiGo for a period of six months, as his conduct onboard was unacceptable behaviour. 1/2

The drama on this front began after Kunal Kamra ended up in the same IndiGo flight as Arnab Goswami. He whipped out his phone and began filming Arnab as he sat trying to studiously ignore Kunal Kamra. “Arnab, are you a coward, a journalist, or a nationalist?” asks Kamras, before adding a jibe at Arnab's own phrase, by telling him that, “the viewers want to know”. Arnab is visibly irritated in the video and within hours of the incident, four of the major airlines in India had banned Kamra though the incident is not unique or, according to officials, does not warrant such action.

#FlyAI: In view of the incident onboard @IndiGo6E, Air India wishes to inform that conduct of Person concerned is unacceptable.With a view to discourage such behavior onboard flts, Mr Kunal Kamra is suspended from flying on any Air India flt until further notice. @HardeepSPuri .

SpiceJet has decided to suspend Mr. Kunal Kamra from flying with the airline till further notice. @MoCA_GoI @DGCAIndia @HardeepSPuri @IndiGo6E

Soon after, IndiGo banned Kamra with no internal inquiry or a complaint from the pilot. Civil aviation minister Hardeep Singh Puri soon gave a statement that he was, “left with no option but to advise other airlines to impose similar restrictions on the person concerned”. The speed with which the airlines – Air India, GoAir and SpiceJet, alongside IndiGo – banned Kamra has raised many brows. As of Friday, Vistara is the only major player over Indian airspace to not ban Kamra. While an influential journalist tweeted that this showed the 'rapport Goswami shares with the government', many have vowed to do the same in case they ended up in the same flight as Goswami. Arun Kumar, chief of the Directorate General of Civil Aviation (DGCA), told Huff Post India that the airlines “should have waited for an internal inquiry before putting the passenger on the no-flyers list." The pilot himself, who was not consulted in this case, had opined that he should have been informed.

Some airlines banned Kunal Kamra for what he said to Lord Bhow Bhow on a flight. I intend to say much more offensive things to him if we r in a flight together, as I regard him a disgrace to journalism. So let us see whether the airlines will have the courage to ban me too

The truth is that it was time someone gave him a taste of his own medicine. These are the words he regularly uses to berate his innocent victims, except he does so in a hectoring, bullying manner & at higher volume & pitch than @kunalkamra88 does in this video. https://t.co/e94B8WcEtj

A passenger may be banned for up to 6 months only if he becomes physically violent during a flight and verbal altercations may warrant a 3-month ban. Kamra had only begun filming when Arnab refused to talk to him, had left within '20 seconds' of the staff asking to do so and had apologised to the crew and shook hands with them at the end of the flight. As Arnab had not responded to him, the incident couldn't be called an altercation either. Hilariously, the Twitterati soon noted Goswami's silence and made memes about the 'only time Arnab has been silent'.

I did this for my hero...
I did it for Rohit pic.twitter.com/aMSdiTanHo

Arnab Goswami has been popularly called a loudmouth, ridiculed online for his style almost every day and nevertheless has the patronage of a majority of the Hindi-speaking television audience. He has been accused of making comments that aim at polarising the community, demonising marginalised sections and he has also been accused of hounding public figures using a team of reporters. More hilariously, Arnab Goswami is famous for interrupting his guests with long impassioned and often off-the-point monologues and more than one of his guests has expressed ire at being treated such.