HDFC bank's net services down for the second day 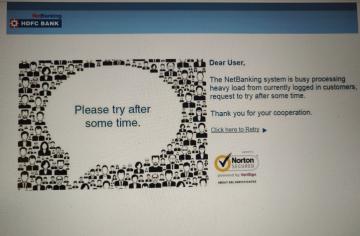 Payday seems to have hit the HDFC bank rather hard this December, what with the firm's net banking channel and App staying down for over 2 days in a row. The bank's market value also dipped by around The Twitter is filled with complaints from the users, who have been using the hashtag, #HDFCbankDown.

HDFC Bank has 4.5 crore customers and at least half of them use its digital channels.

According to some users who posted on social media platforms, the site has been down since Monday. It is still unclear if one may report card losses and such, either. The worst-hit are credit card holders, who are yet unsure if the late payment fee would be waived off. There has also been criticism against the bank's allegedly apathetic customer service.

The bank also took to Twitter to clam the users down. "Due to a technical glitch, some of our customers have been having trouble logging into our net banking and MobileBanking App," read a Tweet on the official handle. "Our experts are working on it on top priority, and we're confident we'll be able to restore services shortly," read the tweet.

This is not an isolated incident, as HDFC had suffered a day's downtime last year also; The bank was forced to roll back to a previous generation App following this.