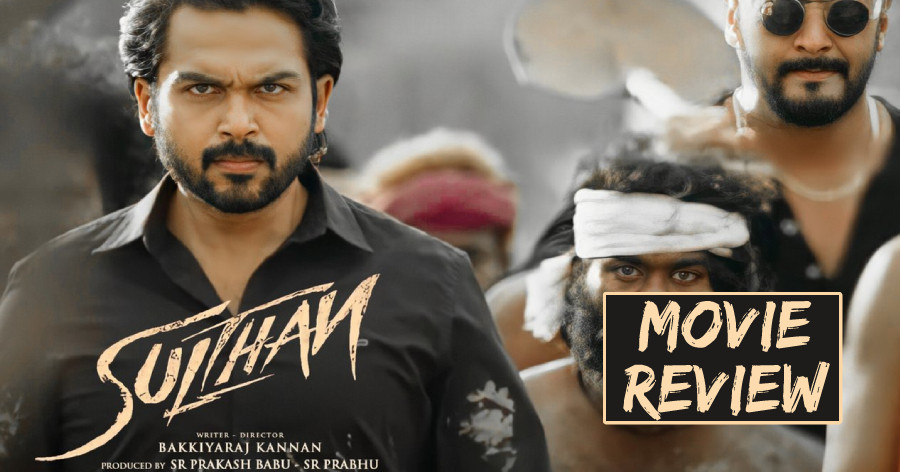 Amidst good expectations from the fans and film buffs, Karthi's Sulthan has released in theatres. The film, directed by Bakkiyaraj Kannan of Remo fame has Rashmika Mandanna playing the female lead and it is her debut film in Tamil cinema. Has the film lived up to its expectations? Here is our take on the film!

Sulthan aka Vikram (Karthi) is the son of an aging don (Napoleon) and he is nurtured and raised by the hundreds of rowdies who work for Napoleon. Sulthan's mother passes away after giving birth and the young boy has always been surrounded by only these men. Certain deaths and incidents make Sulthan realize that these rowdies should change for the good. Sulthan takes it up as a mission to reform them, with an additional operation, to save a village from a business tycoon. Did Sulthan succeed in his mission? Watch the film, to know!

Karthi is absolutely charming and energetic as Sulthan and he carries the film forward on his shoulders. It is so fascinating to see Karthi's diversity as an actor. He is able to do strong action-driven films like Theeran and Kaithi, family dramas like Kadaikutty Singam, and now, a fun-filled masala entertainer like Sulthan. He emotes really well and makes several situations appeal better with his acting. Karthi is definitely the major backbone of Sulthan. He scores well with the action moves, as well.

Rashmika Mandanna delivers impressive performance and she looks cute. Due credits to Ishwarya Baaskar, who has dubbed for Rashmika and the voice suits her. Lal's performance is impactful and he comes in handy with his experience. Some of Yogi Babu's oneliners work and some don't. Sathish has been wasted in a blink-and-miss role. The casting of the rowdies have been interestingly done and they add a good flavour to the film. The villains are definitely weakly written and they don't give a tough fit at all. Though Garuda Ram is highly menacing as Jayaseelan, he falls flat when he locks horns against Karthi. For Nawab Shah, it is even weaker. He comes off as a stereotypical business tycoon and delivers no impact.

Director Bakkiyaraj Kannan's sole intention is to deliver an entertaining action masala entertainer and he succeeds to an extent. The first half of the film is quite fun and entertaining and it keeps you invested. However, the problem arises mainly in the second half of the film where the conflicts are resolved. The film loses its josh and fun right after the interval and it becomes too hard to get back on track. The interval fight sequence gives an adrenaline rush and sets the right base for the second half. However, the momentum is not maintained there. Additionally, the film also suffers from certain cliches.

Director Bakkiyaraj Kannan seems to have been inspired by a lot of recent masala action biggies like Baahubali, KGF, and more, and you can sense a vibe of those films in Sulthan. One needs to appreciate him for executing a film of this scale where majority of the scenes have atleast 30 - 40 people (or even more) and it is not an easy task. Had Bakkiyaraj Kannan packed the film even more tight and neat in the second half, Sulthan would have turned out to be a highly entertaining film. The writing looks unexplored at several places. Bakkiyaraj Kannan doesn't delve deep into the conflicts of the main characters. With stronger writing, Sulthan could have appealed even better.

Yuvan Shankar Raja, who was the last member to join the film, has turned out to be one of the heroes. His powerful background score in the action sequences elevates the mass element to a different level. Yuvan's score is definitely one of the highlights of Sulthan. Vivek - Mervin's songs are impressive and they give good support to the film. Sathyan Sooryan's cinematography is interestingly done and he sets a good tonality.

Putting things together, one can say that Sulthan is a pakka theatrical mass entertainer that can be watched for the vibe it gives, despite its several shortcomings.

Verdict: Despite a draggy second half, Sulthan can be watched for its 'mass entertainment' factor!

Pushpa heaps praise on KGF 2 - check what he has to say about the film!!