The emotional stakes are low, but as a scare-dispensing machine, Ashwin Saravanan's 'Connect' does a pretty decent job 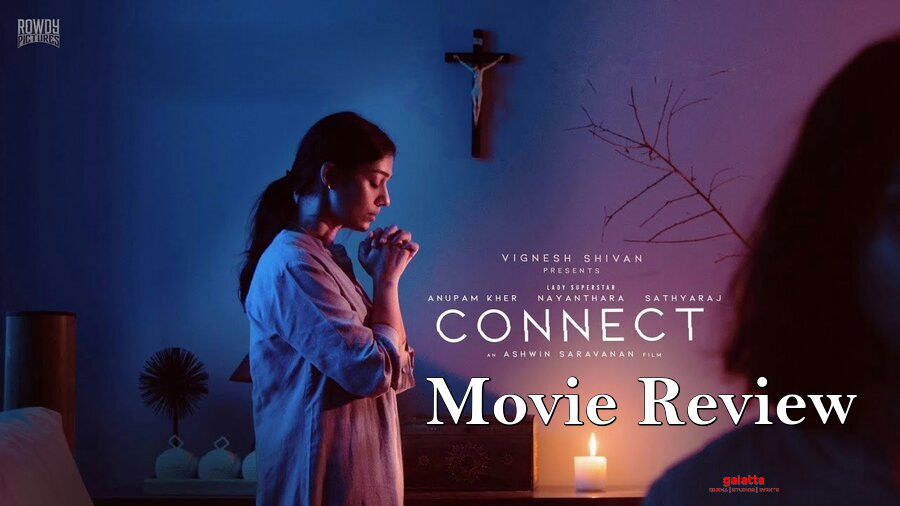 Cast : Nayanthara, Anupam Kher, Sathyaraj, Vinay Rai, Haniya Nafis,
Production : Rowdy Pictures
Director : Ashwin Saravanan
Music Director : Prithvi Chandrasekhar
But the scares apart, there is no emotional depth. And the film does not show anything we have not seen in earlier stories about exorcism.

There are times Ashwin Saravanan's Connect appears to be a COVID-era homage to The Exorcist. Here, too, we have a single mother, played by a gritty Nayanthara, alternating faith and fear. Here, too, we have a teenage daughter, played very nicely – at least from the few scenes she is "normal" – by Haniya Nafisa. Here, too, the father is absent – rather, he is dead. And he is replaced by both the Father from the local Church as well as God, the ultimate Father. And finally, there is the triumph of religion over science, which has failed to save mankind from a deadly outbreak. The demon that possesses the daughter, therefore, could be seen as a manifestation of the virus itself, which – like in The Exorcist – only faith can destroy. Then again, you don't have to go so far and "read" this film at all. As a casual moviegoer, you can simply say you are strapping yourself into a scare-dispensing machine – and on that level, Connect does a pretty decent job.

So let's talk about the surface-level "horror film" before getting into more interpretation and analysis. After an early happy-family scenario (which includes Sathyaraj as the grandfather), COVID sets in. And thereon, for a while, the frames are composed in a way that there is only one person in front of the camera. Everyone's talking to each other on video screens, yes, but even so, we don't see the person talking and the person at the other end in the same frame – say, through an over-the-shoulder shot. Manikandan Krishnamachari is the cinematographer and his deep compositions are very still, very formal. The effect is that of utter disconnection and loneliness. We don't even get a scene of mother and daughter, say, having dinner or watching TV together. Only when it's time to drive the devil away do we see groupings of people. For that, it takes a village. Or at least, a bunch of religious-minded people connected by video calls.

There are a few cool tricks that come from this video-call scenario. When the connection is wonky and the call hangs, we are kept away from whatever's happening – and when the connection is restored, BAM, the jump scare hits hard. Another constant in the visuals is the presence of doors, which are a symbol of the title. They "connect" the various rooms of a house. But they also connect worlds. In sci-fi or horror novels, we often hear of someone opening a "door" to another world. In Connect, it is the spirit world. Hit by depression, the daughter decides to use a medium to contact her father, whom she was closer too. (She informally called him "nee", while she calls her mother "neenga".) And the genie is out of the bottle.

Ashwin and his technical team get through the "scares" part of the film with proficiency. (There's an inspired sequence revolving around a mask.) And the title is extrapolated in different ways – like the lack of "connect" between the daughter and her overprotective mother, or the mother's gradual lack of "connect" with religion, or even the loss of "connect" over wi-fi. Above all, there's this pandemic, which has made us all lose "connect". But the underlying narrative is derivative and predictable. One reason is that the film does not show anything we have not seen in earlier stories about exorcism. The voice-deepening of the victim, the ability to speak other languages, the ability to know things that are impossible for a "normal" person to know, the big-finale exorcism – it's all in here.

But more importantly – or perhaps disappointingly – there's no psychological depth, which was such a major part of the director's earlier film, Game Over. There are many interesting angles – like how mediums make money through evil spirits. But none of these are explored beyond the mere statement or depiction of such a situation. I am all for shortened running times (Connect runs about an hour-forty, with an intermission), but not at the cost of involvement. To go back to The Exorcist, one of the most resonant emotional layers was that the devil was driven out by a priest who had doubts about the existence of God. That is what separates a movie from a scare-dispensing machine. For all the craft in Connect, what's missing is that solid emotional connect.