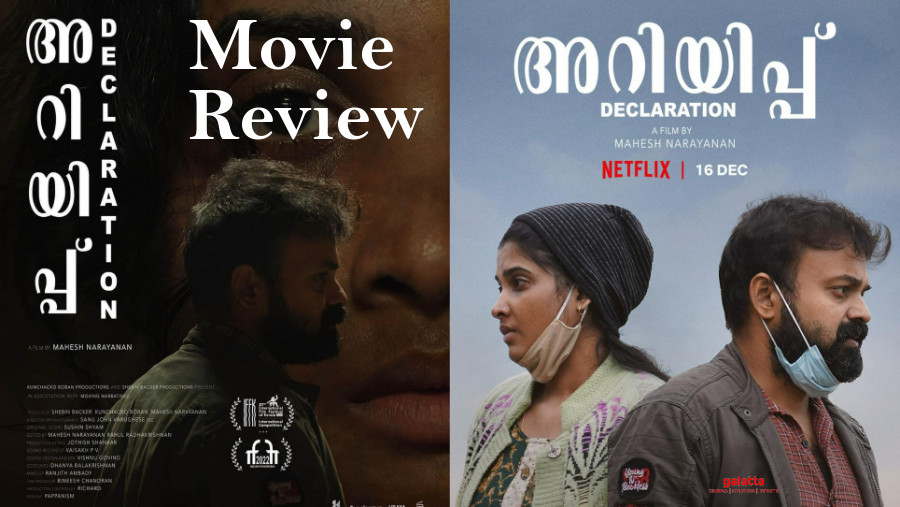 The first stretch of Mahesh Narayanan’s Ariyippu is set in a glove-making factory in Noida. Reshmi (Divya Prabha) is testing gloves, and despite it being an assembly line, she seems to be alone. This is due to the framing. Reshmi is in the centre, in a vertical strip, and the parts to her left and right are blacked out – it’s like Cinemascope, but in a vertical format. A little later, we see why Reshmi has been singled out this way. The next sequence fills the whole screen, and it shows Reshmi and her husband Harish (Kunchako Boban) signing papers to get a visa to go someplace with better prospects. Harish works in the factory, too. They are migrant labourers, from Kerala, and they work in an environment that’s filled with the sounds of Hindi, Tamil and Malayalam.

It’s COVID time. Everyone’s wearing masks. And then we have the gloves, which are another form of protection. Slowly, these devices come to form a sort of irony – because the story is about people who do not have any kind of protection against the iron hand of an uncaring System, which includes cops and higher-ups in the factory. Reshmi and Hrish are helpless in every way. Even the man who’s getting them the visa is exploiting their helplessness, their lack of protection. The film sets us amidst this unfeeling atmosphere, this robotic factory where even the workers are like robots. Occasionally, there is a human touch, like when a woman flirts with a man in the hope that she can get a smartphone in return. Or when Harish sees old pictures of him and Reshmi by the Taj Mahal. Or when we see Reshmi’s wedding ring, which just won’t come off. It’s a symbol of the relationship she’s stuck in.

Harish is not a bad man, exactly – he’s just desperate, and desperation has a way of making people do bad things. After laying out the milieu and the lives of these people, the plot kicks in. Harish gets a video of a sex tape, and the couple’s life is shattered. At the factory, too, something goes terribly wrong. Let’s just call it a kind of corruption: it involves the gloves as well as an incident of sexual harassment. And Ariyippu splits into two strands of investigation: the first about the sex tape, the second about the corruption in the factory. They’re linked somehow, and that’s the film’s primary source of drama. Now, “drama” may not be the right word to use for this film, which Sanu John Varughese shoots with zero frills and a keen documentarian’s eye. The events may sound “dramatic”, like other conspiracy/whistleblower films like Silkwood or The China Syndrome – but the treatment is so lifelike, so real that we seem to be in the midst of these people, as opposed to seeing what happens to them from the outside.

In Harish and Reshmi, Mahesh creates two very believable and very vulnerable characters. Reshmi wants to return to Kerala, but Harish wants to get out. Reshmi seems the bolder of the two, and also the more conscientious. Again, it’s not that Harish does not possess a conscience. But his desperation does not allow us to see his inner workings, his moral code – because all he wants is escape. And these things that are happening are holding him back, adding to his frustration. Even his most despicable act, when he forces Reshmi to perform sex on him a certain way, has the whiff of desperation. Divya Prabha and Kunchacko Boban are wonderful. She carries with her (and within her) a quiet strength. Someone tells Reshmi not to suppress everything within her, but she is not the kind who acts out. Harish, meanwhile, is an entirely external person. You see him and you know exactly what he is thinking, what he is going to do, what kind of man he is.

In the end, Ariyippu also becomes the story of a marriage. As the story goes on, Reshmi and Harish bear little resemblance to the happy faces we saw in those Taj Mahal pictures. In a superb scene, Reshmi walks on as Harish stops in his tracks, looking after her, as a street dog ambles into the frame. At that moment, man and animal seem one – creatures with no “address”, making do with scraps. As in Mahesh’s C U Soon, we see how technology affects interpersonal relationships, and how trust can so easily be eroded. Mahesh employs an understated style that serves this material beautifully, and the film convinces us that, to some people, life may be as much a product of the assembly line as in a factory. The only escape is perhaps to possess a degree of humanity.