Bigg Boss Tamil season 5 is all set to begin soon, with broadcasting giant Vijay Television releasing a fun-filled promo and a teaser a few days back featuring 'Ulaganayagan' Kamal Haasan once again as the show's host. The actor-politician also unveiled the Bigg Boss 5 logo in pink color this time, which has received a huge response from fans online. As there are expectations that the upcoming edition of the show will begin airing on Vijay TV, including streaming on DisneyPlus Hotstar from October, the big subject of debate among fans for sometime has been the new batch of contestants entering the Bigg Boss Tamil season 5 house.

Of late, there have been reports stating that popular Tamil celebrities namely 90 ML actress Masoom Shankar, Thulluvadho Ilamai actor Abhinay, Boys fame Manikandan, including social media sensation GP Muthu will most likely be entering the Bigg Boss 5 house. As an official word is awaited in regard to their participation, popular Tamil serial and film actress Suzane George has now hinted her entry in the Bigg Boss Tamil 5. Suzanne shared a meme on her Instagram Story that included the info that she is unofficially confirmed as a contestant on Bigg Boss, while also dropping a heart emoji atop the picture. Although not a direct confirmation, the actress' hint on her entry has left fans wondering whether she will be announced as one among the sixteen when Bigg Boss 5 begins rolling. 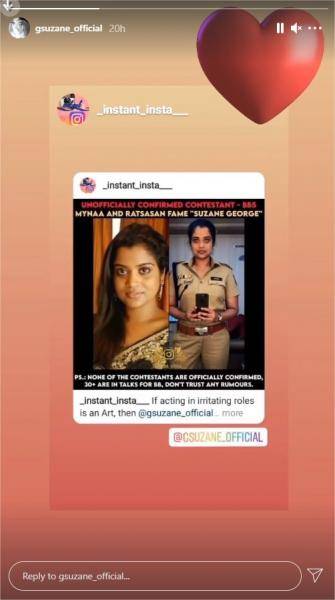 Suzane George made her acting debut in the 2008 film, Arasangam, but made a big impression after her powerful performance in the blockbuster Mynaa in 2009. Subsequently, she landed roles in films like Vemal's Desingu Raja, Udhayanidhi Stalin's Nanbenda, Jyothika's Jackpot, including the Vishnu Vishal psychological thriller Ratsasan. Suzanne became a household name after making appearances on hit Vijay TV serials like Saravanan Meenatchi and Office.

Yashika gets emotional while sharing an update on her next film - Breaking statement!