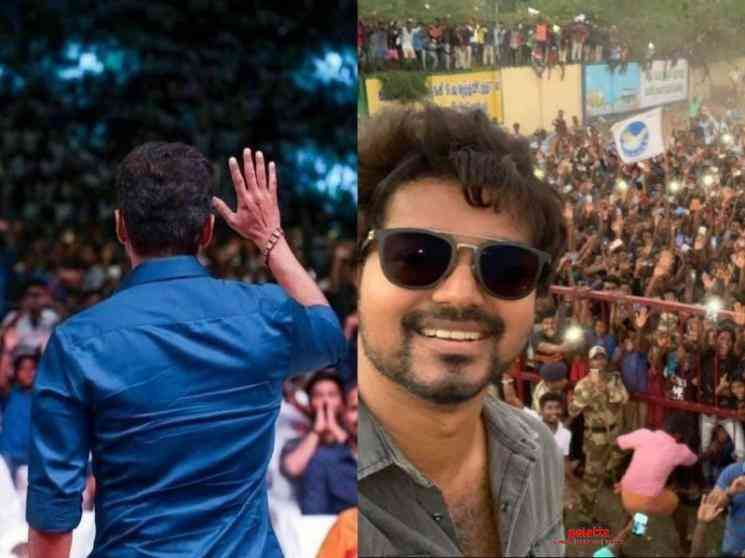 One of the biggest superstars in the country, actor Vijay's popularity continues to skyrocket upwards with the passage of each day all across South India. 'Thalapathy', as he is lovingly called by his ardent fans around the world, Vijay has been a money-spinner powerhouse star for Tamil film producers over the years. Having been a part of the Tamil film industry for nearly three decades, there have been many occasions over the years where fans, celebrities, personalities from all walks of life and many political analysts have believed that Vijay would be entering politics when he felt the time was right.

Meanwhile, a rumor spread like wildfire after a leading private Tamil news channel ran a report on Thursday stating 'Thalapathy' Vijay had registered the name for his political party with the Election Commission of India. Soon after the news report, excitement among a large section of fans shot up instantly, with many taking to social media to share the news and express their happiness that the actor was making his first big political move. Having said that, the report has now been dismissed as untrue by PRO Riaz K Ahmed, who shared the news report, while stating that Vijay has not made any such move as being stated. A clarification has been issued stating no name for a political party has been registered by Vijay with the Election Commission of India. Below is PRO Riaz's clarification tweet:

This latest news has created a massive buzz among Vijay fans around the state, who on many occasions over the years have expressed their desire to see him enter politics. Although the news will be coming as a disappointment to a certain section of his followers, the actor's clarification will now put an end to all the rumors regarding his political plans. It is to be noted that Vijay had last month met with the members and office-bearers of his Vijay Makkal Iyakkam from Trichy, Madurai and the Kanyakumari districts. The meeting was a casual one where the superstar is said to have informed the members to further strengthen the organization.

Vijay, who is riding the high wave with three back-to-back box office blockbusters namely Mersal, Sarkar and last year's Bigil, is currently waiting for the coronavirus situation to take a better turn so as to begin preparations for the theatrical release of his Master, which was initially slated to hit screens earlier this year as a summer treat on April 9. Directed by Kaithi and Maanagaram fame Lokesh Kanagaraj and produced by Xavier Britto under the XB Film Creators banner, the highly-anticipated film touted to be a mass masala action thriller featuring chart-buster music by Anirudh Ravichander will see Vijay facing off 'Makkal Selvan' Vijay Sethupathi, who is the antagonist.