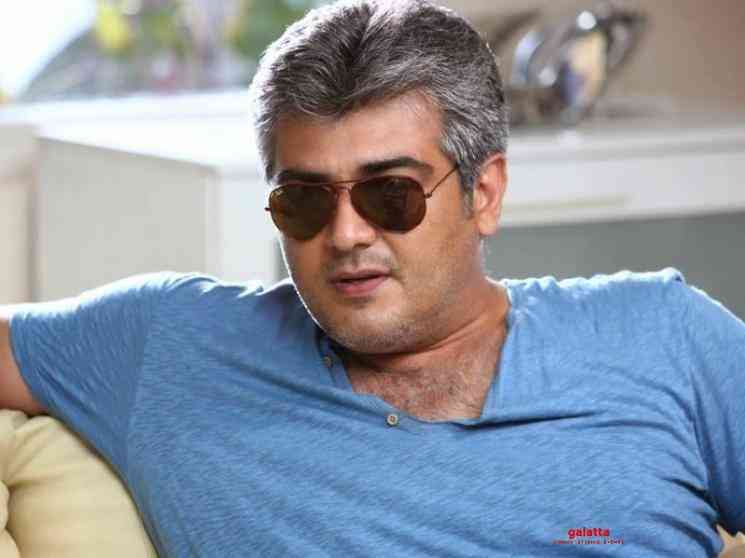 A film that has been widely debated among fans since early 2019, Ajith Kumar's Valimai, which will see the superstar in the role of a police officer, is being directed by H. Vinoth under Boney Kapoor's Bayview Projects LLP banner, with music by Yuvan Shankar Raja. Announced to be an out-an-out action film catering to family audiences as well, the upcoming venture is the second consecutive association for Ajith with H. Vinoth, Boney Kapoor and Yuvan Shankar Raja after their blockbuster hit, Nerkonda Paarvai, released last year. With shooting on Valimai ongoing at an active pace, a picture from the film has made its way online and has gone viral.

The latest Valimai photo shows Ajith alongside veteran actress Sumithra, Kannada actor Achyuth Kumar, Raaj Ayyappa who acted in Atharvaa's 100, and a couple of other cast members. Although the image has not been released officially, it has been receiving stellar feedback from fans, as it is a new glimpse of Ajith from the film after a picture of the actor performing a bike stunt took social media by storm sometime back. It is to be noted that Ajith’s manager Suresh Chandra a few days back in a statement on behalf of the actor said that the Valimai team would be giving fans an update at the right time. Check out the latest pic from Valimai that has taken social media by storm:

Valimai will be the first time since 2015’s Yennai Arindhaal when he was last seen as a cop, with director H. Vinoth and producer Boney Kapoor assuring fans that their upcoming film will be a complete action feast that will cater to audiences of all ages. Fans were worried a while back after Ajith had sustained an injury while shooting a motorbike action scene, with the actor since then making a recovery. Incidentally the first big Tamil film production venture to resume shooting after the government lifted the pandemic lockdown restrictions, Valimai's filming is currently being carried out as per the COVID-19 norms. Apart from Ajith, Valimai will also include Karthikeya who is speculated to be playing the antagonist, with Kaala fame Huma Qureshi as the female lead, followed by Yogi Babu, Saranya Ravichandran among others forming the supporting cast.