Suriya's next release as an actor would be Jai Bhim which is scheduled to release on November 2, ahead of the Diwali festive weekend. Jai Bhim will have a direct OTT release on Amazon Prime Video and it will be Suriya's second direct OTT release film after Soorarai Pottru. Jai Bhim is directed by Tha Se Gnanavel who earlier directed the Ashok Selvan starrer Kootathil Oruthan. Meanwhile, the latest new update on Jai Bhim is that the film has been certified with an A certificate and this development has taken a lot of them by surprise. The reason behind the A certification is not yet known, but it looks like the film has elements of violence and strong/bold content.

The picture that carries the censor details of Jai Bhim has been doing rounds on social media since this morning. The final runtime of the film is locked at 164 minutes (2 hours 44 minutes). Though it is not mandatory to have a censor certificate for an OTT release film, it looks like Suriya and the team have planned to send Jai Bhim for award ceremonies and film festivals. Jai Bhim features Suriya playing the role of an advocate and he will be seen playing an important role. Sillu Karuppatti fame Manikandan and Sivappu Manjal Pachai fame Lijomol Jose play the lead roles, while Karnan sensation Rajisha Vijayan, Prakash Raj would be seen playing supporting characters.

Produced by Suriya's 2D Entertainment, the film has music composed by Sean Roldan, while the cinematography is handled by SR Kathir. The story of Jai Bhim is based on certain real-life incidents and it is going to be interesting to see how director Tha Se Gnanavel has packaged the film. From what we hear, it looks like Jai Bhim will be an intense watch that will have a strong message. For now, check out the latest censor details of Suriya's Jai Bhim here: 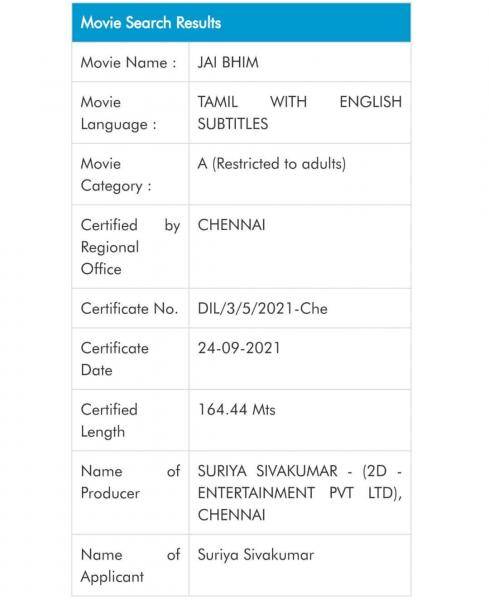